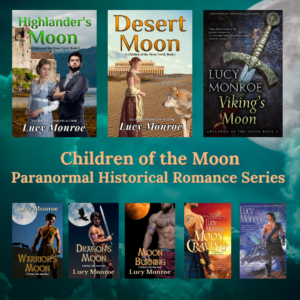 Highlander’s Moon is the 8th full length novel in the paranormal historical romance Children of the Moon series about the shifters among the ancient Scottish Highland clans. Scroll down for a complete list of the series in order of publication from newest to oldest.

He’s determined to have her for his wife and his mate. She’s determined to keep her freedom unless he loves her. It’s a contest of wills that even an alpha wolf shifter isn’t guaranteed to win. (Steamy Regency Paranormal)

A warrior princess and a Viking are destined mates, but what happens when destiny is denied? (Steamy Medieval Paranormal)

Chrechte wolf shifter Caelis turned his back on his human lover Shona so that he could remain loyal to his pack. Six years later, he thinks she’s dead. He’s wrong… (Steamy Medieval Paranormal)

When Talorc-laird of the Sinclair clan and leader of his werewolf pack- must wed an Englishwoman, he’s shocked to find that she is his mate. (Steamy Medieval Paranormal)

Emily Hamilton volunteers to marry a Scottish laird in order to save her younger sister. But she can’t save herself from being kidnapped by a werewolf clan-and its wild-hearted leader. (Steamy Medieval Paranormal)