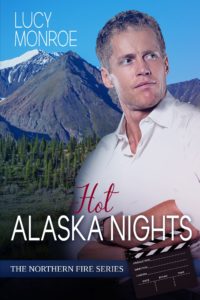 Internationally Bestselling author Lucy Monroe has a new book out!

The long awaited second book in her Northern Fire series, Hot Alaska Nights is out now.

Self made billionaire, Rock doesn’t live by anyone’s rules but his own. He’ll be damned if he’s going to let the bright lights and big stars of Hollywood intrude on his home. Not even Deborah’s mega-watt smile can convince him. But as the sparks between them intensify, Rock realizes that the fire they’re feeling could be more than the smoke and mirrors of Hollywood. . . it could be the real thing.