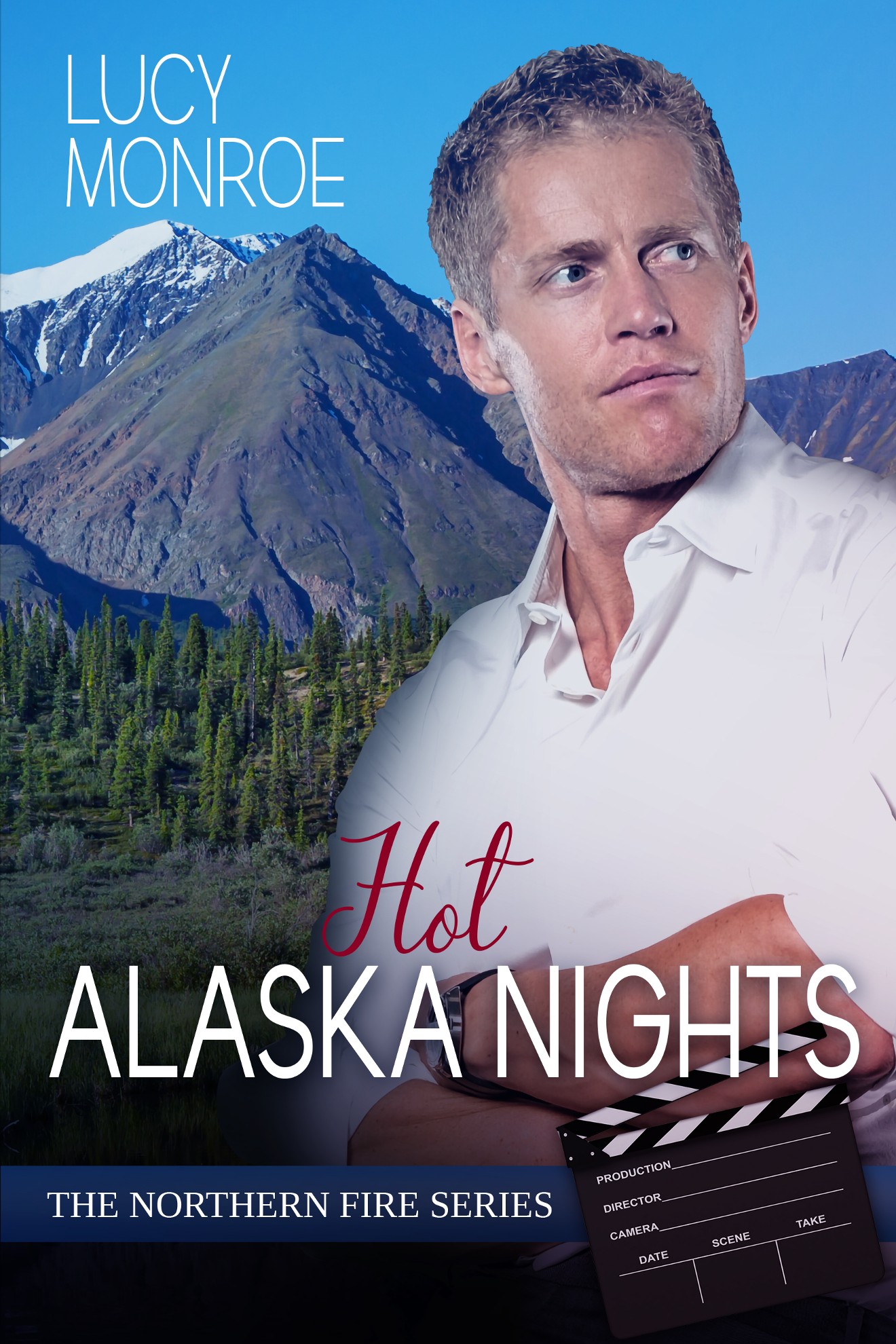 The days may be cold, but the nights are red hot in USA Today bestselling author Lucy Monroe’s Northern Fire contemporary romance series.

Deborah Banes gave up her family for her dreams and when the role of a lifetime requires a location shoot in Cailkirn, Alaska, she know she can weather the freezing cold temperatures. It’s the heat she feels when she sets eyes on the tall, rugged, and impossibly stubborn Rock Jepsom that has her worried.

Rock doesn’t live by anyone’s rules but his own. He’s given everything he has to make his land and his hometown something he can be proud of, and he’ll be damned if he’s going to give it all up to bright lights and big stars. Not even Deborah Banes’ mega-watt smile can convince him to change his mind. But as the sparks between them intensify, Rock realizes that the fire they’re feeling could be more than the smoke and mirrors of Hollywood . . . it could be the real thing.

“Incoming!”
The warning came a second before Deborah Banes’ seat companion plopped a half-full plastic cup on her small food tray.
Right next to where she’d been tapping away on her tablet.
The strong scent of spirits hit her nostrils as the amber liquid sloshed over the sides, barely missing the minicomputer she’d given up movie nights and her favorite herbal tea at Starbucks for six months to afford.
“Cool it, Carey!” Three hours into the five-hour flight, Deborah’s patience with the younger actor was wearing thin.
She couldn’t decide if her co-star for the indie film she’d landed her first starring role in at the ripe age of twenty-nine was nervous, excited, or both. She sincerely hoped this was not his natural state. As they travelled together, he had annoyed with enough persistence to give her some serious concerns about the next ten weeks. Regardless of how talented his screen test had shown him to be.
“Lighten up, Debs.” His affected English accent slipping, he gave her the winning smile that made the director’s second assistant giggle like the school girl she’d left behind decades before.
Deborah gave a mental eye-roll. The man was from Alaska, not the UK. And apparently had the perfect location for filming, which he’d offered the producers in exchange for his role.
Not that it had been put that way to Deborah, but secrets were hard to keep in Hollywood. Talent wasn’t everything in this business. Considering what starring opposite Carey James would mean for her career, she was just grateful he had his fair share of it.
She’d made her own deal with the devil to make this film and it wasn’t for her credit as primary female lead.

“My name is Deborah,” she told him for something like the tenth time.
Carey nodded sagely, alcohol turning his bright eyes hazy. “I know.”
“So, maybe, I don’t know…could you try and use it?”
He laughed like she’d made a joke. “Sure, Debs.”
Oh, sheesh. “Carey?”
“Uh huh?”
“Don’t you think you should take a nap before we land?” she hinted.
“Plenty of time to sleep later tonight.” He winked. “Much later.”
She could do without the heavy-handed flirting. If she thought for a second he was really hitting on her, she’d shut him down fast. But he wasn’t giving off that vibe. He was what Deborah’s first college roommate had called harmlessly tipsy.
“Or, you know, right now.” She tried appealing to his ego. “You don’t want poufy eyes on the first day of filming.”
For a brief moment, she thought it was going to work as his expression turned horrified, but it smoothed out a second later. “The camera crew doesn’t arrive with the equipment until tomorrow. They’ll take at least a day to set up.”
“Did you even look at the schedule?” Because the one she’d been emailed indicated preliminary takes were happening the next afternoon.
At least one cameraman with basic equipment had to have flown in with the primary film crew that arrived into Anchorage a couple of days before. The director, Art Gamble, and his assistants were supposed to visit the Cailkirn location today in order to determine initial settings.
Independent films ran on a tighter schedule as well as a much tighter budget. Not to mention about a tenth of the crew associated with a blockbuster production. Even so, she thought it was an ambitious schedule. Deborah might have negotiated her way into a tiny production credit and the chance to direct two scenes, but in Art’s eyes she was still the actor, not an official part of his team.
According to Carey, who was never loathe to talk about himself, he had given some very detailed specs on the property outside Cailkirn, Alaska. Presumably, Art and his crew were not going in blind. Deborah still wished she was with them.
She’d never expected to go all the way to Alaska for her first break onto the big screen, or for that break to be her way to the other side of the camera.
After another jostle at her elbow that sent more of her untouched drink splashing dangerously close to her tablet, she gave up any hope of adding to her notes on her character. She put the computer safely away.
Deborah tried for a genuine smile for Carey. “Is your family still in Alaska?” It wasn’t his fault he was young for his age and she was old for hers.
At least on the inside.
Her skin? Was flawless. Some things were more important than running the dilapidated AC unit in her apartment.
Carey grimaced, his expression turning almost furtive, before it smoothed into his usual smile. “Just my older brother. My sister is going to the San Francisco School of Fine Arts.”
“Acting is in the blood, huh?”
“You bet. You’ve heard of my parents, Georgia Howell and Errol Jepsom.”
Okay, so the hokey old stage names ran in the family. “Um, I…” She hated to admit she didn’t know the pair, but she’d never heard of either actor.
“I guess they were a little older than you.”
Ouch. “If they were your parents, that’s a good guess.”
He smiled, like he hadn’t just insulted her. “They made mostly low budget films. Classics really. Mom was like Jamie Lee Curtis.”
“She got her start as a scream queen?” Deborah wasn’t sure the comparison was an accurate one, even if both women had gotten their start in the industry doing horror films.
Georgia Howell had clearly not parlayed that beginning to major stardom. Unlike Jamie Lee Curtis.
“Yeah, but she and dad fell in love, had us kids and well, they died tragically before they got their big break.” Carey looked almost defensive. “They did all right though.”
“So, is your brother an actor too?”
“No chance. He’s got the looks. The name. Rock Jepsom, right? But he’s got no sense of drama.”
Deborah had a feeling Carey had enough dramatic sense for both brothers.

Rock yanked the fifty-pound hay bale down from the stack and carried it to Orion’s stall. The large, black Percheron stallion was in the paddock with Rock’s gray mare of the same breed, Amanda. He’d planned to ride this morning, but he was too pissed.
He needed to work off some of his anger before mounting a horse, even a calm-tempered one like Orion.
Damn Carey.
It wasn’t enough Rock’s baby brother had gone to the Lower 48 to follow the same dreams that had killed their parents. No, the idiot had to spend the entire inheritance Rock had built him out of the money their parents left chasing the fantasy.
He probably thought Rock didn’t know the money was gone, but seriously? Like he wouldn’t have left himself a backdoor to his brother’s accounts when he turned over his inheritance. It was because of that backdoor that Carey still had money to go back to university if he wanted to.
Not that Rock would tell the twenty-two-year-old that.
Not after Carey had signed away the use of Rock’s land as a movie location.
In exchange for a damn lead role.
Not that the suits who’d shown up at Rock’s gates had said that exactly, but he wasn’t an idiot.
And neither was his brother, really, all evidence to the contrary. Carey knew how pissed Rock would be when he found out what his little brother had done.
The boy wouldn’t have risked Rock’s wrath for anything less than a shot at his big break. The same big break their parents had still been chasing when their plane crashed ten years ago.
Damn it. Rock flaked the hay into Orion’s stall with vicious movements.
Just damn it all to hell and back.
He could hear Carey now. “Please, Rock. You know how important this is to me.”
The little shit was going to be shocked when he realized Rock wasn’t falling for it this time.
The execs had been surprised enough when Rock refused them entry to Jepsom Acres. Both times. The director had arrived with his assistant first. When Rock refused to open the gate, he’d left, only to return an hour later with the executive producer. They’d had a hard time believing Carey hadn’t told Rock about the deal. Rock wasn’t.
It was typical Carey James move.
If he’d thought Rock would be too embarrassed or loyal to tell the execs the papers giving them access to his land weren’t worth the pulp used to make them, then Carey must have suffered brain damage down there in LA.
Carey and his twin Marilyn’s names might still be on the deed, but their combined ownership only totaled twenty percent. Both had opted to accept more money from Rock in exchange for most of their inherited interest in the house and land when they turned twenty-one.
At least Carey hadn’t run through that as fast as he had the half-a-million Rock had been forced to turn over to his brother on his eighteenth birthday.
He hadn’t wanted to buy his sister and brother out completely. They were family and should know they still had a home, no matter where their wanderlust might take them. Even if their only parent was an older brother.
But he’d needed to know his home was safe from the obsession with stardom. Rock had put too much into building a life completely unimpeded by show business. It was a damn good thing he’d done things the way he had.
If he hadn’t, he’d have an entire film crew and cast camping out on his front lawn. Now, wouldn’t he?

The producer and director’s identical expression of smug certainty said they did.
“Let’s get something clear, here.” He let his expression settle into something only his worst business rivals ever saw. “You come for my brother and I will come for you.”
“Is that supposed to intimidate me?” the producer demanded, but Ms. Morganstein’s tone wasn’t nearly as full-throttle as her words.
She didn’t look intimidated exactly, but she did look thoughtful.
“I think, if you were independently wealthy, you wouldn’t be here in Alaska, looking for a free location,” he answered with characteristic honesty.
Gamble swallowed his coffee wrong and then started sputtering, “Jepsom Acres happens to be perfect for the storyline which plays out almost entirely in the country. I assure you, we do have the funds necessary for this production.”
“Right now, you do. How much you have tomorrow, or next week will be in direct correlation to how far you take thisthing with my brother. You want to blackball him, you go right ahead. You try putting him in jail, good damn luck funding another movie in the next decade.