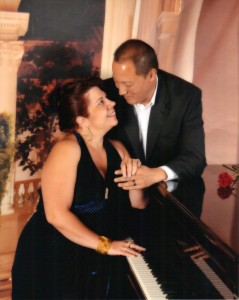 It will come as no surprise to many of you that in this Tango of 3 Steps Forward, 2 Steps Back in my journey toward wellness, some of those steps have been taken in my marriage.  Both Tom and I have struggled with the reality of my depression and his ADD and well, nearly three decades of marriage.  We are deeply in love, but that doesn’t make being in love easy. I write romance…if you’re reading this, you probably read it as well and you know that I don’t believe good relationships ever follow easy paths.  My own included.  So our Tango led us to a few weeks with a truly amazing marriage counselor.  Last week, we graduated I guess you’d say.  We have one final session in a month, but Andrew wanted us to re-write our story…to give it a happy ending.  No, I did not write a book. LOL

I asked Tom if I could share with you all what I did write and he said yes.  I loved what he wrote so much, you’ll find his “minstrel’s tale” at the end of this as well.

Here you have it…

When given the task of rewriting our story, I struggled between writing what I wanted to be true, what I thought could be true and perhaps what I hope might be true. Then I asked myself that writerly question, the one that begins most truly great stories, “What if…” What if it could all be one in the same? What if the epic romance that I wanted, had believed for so long I had been blessed by God to have, what if that was REAL? What if what I hoped might be true could be true?

What if our story was just starting all over again instead of stuck somewhere in the middle, or painfully in the black moment? What if our love WAS epic and total and big enough to fill an ocean?

It really kind of is. It weathered every romantic cliché back in the beginning, family members trying to drive us apart. The best friends that wanted to do the same. Jealousy and misunderstanding from the outside, lack of certainty and confidence from within. We listened to God and made two amazing children, listened again and adopted another. We’ve weathered illness, joblessness, spiritual doubt, all sorts of pain and family drama. We have given homes to the homeless, but never lost our own sense of being home for each other. Isn’t that the kind of love the fills an ocean?

So our story is big, it’s powerful, it’s full of purpose and plans and sacrifice and sometimes exhaustion, but most of all? It’s full of love. For each other. We’ve never given up on each other and I don’t believe we ever will. Is that rewriting the story, or simply accepting that we’re ready for the next chapter? Ready for the next adventure?

I think things happened too fast when our children moved out. We didn’t get to transition into an empty nest so much as take rocket ships to a new space station called Grandparenthood. I’m not sure we were ready for any of it, but we did our best; we’re still doing our best. We need to set better boundaries with our adult children, remember we, Tom and I are still a couple and that we are still in love and ready to love each as we always have done. Always will do. 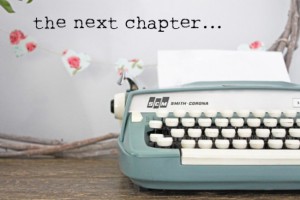 This story we are writing doesn’t need to be rewritten, simply continued, chapter after chapter with two protagonists who are neither perfect, but who are still so very undoubtedly perfect for each other. Tom is still the hero of my heart, still the man whom I look upon with the most wonder and admiration, to which no other can compare. Will he hurt me again? Undoubtedly. Will I hurt him? The same. On purpose? Never.

Our story is yet to be written day by day in our desire to love one another, bring the best to one another and bless one another with the greatest happiness that we can. Is there more to do to make our marriage stronger? I’m sure there is. There always is. But that’s part of what makes life such a grand adventure. If it were perfect, if there were nothing left to improve upon, how boring would it be?

I don’t write happy endings in my books, I write happy beginnings. And that is what I’m writing here. Another happy beginning for Tom and I. The beginning of another happy chapter in our lives, one in which we will remember to have date nights, to talk in the bath, not sit at either end and read (J), to take walks together (both to keep me from getting too housebound and to keep us in the moment and connected for the sake of his ADD), and exercise together, where we will strive for honesty – but slips brought on by ADD will be forgiven, one in which we will have nights where we’ll tell the kids it’s a Mom and Dad only night, one in which we’ll spend time with other couples our age, not just our children, one in which we’ll make sure both our needs are being met.

Maybe we’ll slip sometimes. Okay definitely, but we’ll keep coming back to the plumb line that is Christ and ultimately that will keep our marriage focused on love and compassion, not just the next thing that needs to be done, the next deadline to be met for either of us.

And yes, that really is how I see my marriage…the real life romance I live every day, I fight for and refuse to give up on, no matter how difficult it may be. I know I am one very blessed woman, but am never so aware as when I read the words Tom wrote me in his Bard’s Tale: 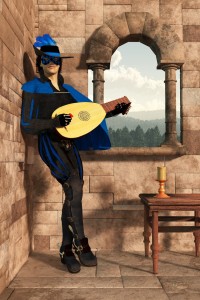 Once there was a Boy and a Girl,
Who met and fell instantly in Love.
They wedded and began to Live Happily Ever After,
Walking hand-in-hand on the Journey they had set upon,
Sunshine in their eyes by day and Starshine in their hearts by night.
***
As they journeyed on, the Boy and Girl saw many wonderful things in the Forest and Fields,
And learned many New Things; it seemed that the Interesting Things were never-ending!
Over Time, the Boy began to get distracted by the Shiny Things,
And in his distraction, he let go of the Girl’s hand and soon became Lost.
***
The Girl, seeing the Boy so Lost, felt that it was because she was no longer Shiny,
And that the Boy only wanted Shiny things.
The Girl began to feel un-Shiny and Alone, and blamed herself for the Boy drifting away,
And felt that if she could only also be Lost, that she would find Peace….but not Joy.
The Boy meanwhile watching the Girl become Lost,
Realized he was losing her but felt too Lost himself to help.
Standing side by side, the Boy and Girl felt Cold and Alone.
***
Suddenly there came a Bird, who alighted in front of them and said,
“You have become distracted by the Shiny Things of this World,
And Dust has clouded your sight to the Shiny-ness of each other. Behold!”
And suddenly the Boy and Girl could see Anew,
And they Held one another in a newfound Love and Joy.
“I had thought you found me unshiny!” said the Girl,
To which the Boy replied, “You were, and are, Always the Shiniest.  I was just too clouded to see it!”
The Boy and the Girl promised there and then to keep each other the most Brilliant,
In their Eyes and their Hearts.
***
From that Time On, people who would see them would marvel at their Love and Care for One Another,
Living Happily Ever After again,
Walking hand-in-hand on the Journey they had started upon,
With Sunshine in their eyes by day and Starshine in their hearts by night…