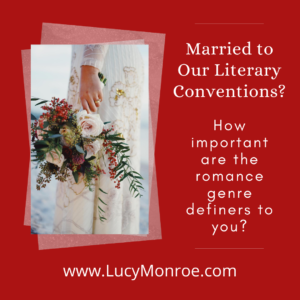 I’ve been listening to Neil Gaiman’s MasterClass on Genre Fiction and it’s got me thinking.  Probably because so much of what he has said in his other courses struck a chord with me, I found it double disconcerting to be caught up short by his definition of genre fiction.

This idea that each genre has a list of “must have” conventions as a list of events for each story isn’t a new one.  In all probability, it is this belief that feeds the idea that genre fiction is written to a formula.

Presumably, applied to the romance genre, the idea is that the plot exists so that x, y & z do not happen all at once.  But if that’s true, then what are those events?  Must we include certain conventions in every book to satisfy readers?

Reading what others had written on the conventions of romance wasn’t very helpful.  One blogger claimed that: In a romance novel, you’d expect there to be a meet-cute, a first kiss, and a rival love interest. Each of these is a convention of the romance genre. (from Genre Conventions vs. Tropes: What’s the Difference by Savannah Gilbo)

Um, no.  If you read romance, you know this is simply not true.  Not every romance includes the couple’s first meeting, first kiss or a rival love interest (in fact a rival love interest for me as a reader will usually put me off buying the book – just saying).  Reunion stories may share the first kiss in a flashback, but are as likely not to.  Some Sweet romance may have a single kiss in the entire book and it’s at the end.

So, what are these supposedly universally accepted genre conventions?

Well, according to Romance Writers of America, Two basic elements comprise every romance novel: a central love story and an emotionally satisfying and optimistic ending.

I’m going to be honest and say that these two elements are the only “conventions” I’ve ever attributed to genre romance.  But it is also true that the subgenres of romance are defined by certain parameters.  Historicals are set in a time period before the current one.  Contemporaries are set in modern times.  Paranormal romance has fantasy or science fiction plot elements.  Etc.  Still none of these are a list of events that must happen in a romance for the reader to be satisfied.

The plot does not in fact exist to make sure that a list of recognized romance conventions do not happen all at once.  The romance is elemental  to the plot.  Yes, there must be “an emotionally satisfying and optimistic ending” and yet, that ending doesn’t even always include a verbal admission of love.  While I personally might prefer that, I’ve read dozens of romances I enjoyed that did not have that element.

I do believe genre fiction has conventions, but those conventions are not a formula.  Commonalities do not equate to hard and fast rules.

I’m a voracious reader of most genre fiction and have been since I was a teenager.  While I have noted commonalities in stories, they don’t all break down into neatly packaged key events that happen in every book.  I can think of a cowboy story that happened on a train.  No riding the range, or even meet up with a buddy, but it was still undeniably cowboy genre.

All of this thinking has brought me full circle.  When I read genre fiction, I *am* looking for conventions, but they are elements not events.  Having certain events does not in fact make a book a novel about a love story rather than a romance novel, or a story about a cowboy rather than a cowboy story.  That “novel about” implies those books don’t fit in the genre category and while it may, or may not be true, it is because of missing elements, not missing events.

If you read one hundred romances that all have the same series of events, chances are you are reading from a particular imprint, or series.  While editorial guidelines for different imprints and publishing series change over time, they are the most likely culprit of the literary conventions as events theory.  Those events may be the easiest way editorial or a particular author sees of keeping promise expectations to readers.

For me, genre fiction conventions are painted in broad strokes and leave a great deal open to author imagination.  Others may not agree.  For some readers, it’s entirely possible they have a list of events that they expect in every romance novel and when those events don’t happen, they aren’t happy.  That’s personal preference, but the very existence of the diverse stories and even story structure within the romance genre defies the idea that the genre can, or should be defined by everyone in that way.