My husband used to write travelogues for our trips. They always made me laugh. This is one he wrote for our trip to Australia in 2005. Wish I could find the one he did for New Zealand that same year. 🙂

As part of the Monroe family journey to the South Side, we now take you to Australia, home of boomerangs, Crocodiles, and Mad Max. Tune in now as the Monroes journey down the yellow brick road to the land of Oz.

We flew out Monday from Auckland, NZ on a nice 3.5hr flight into Melbourne. At the airport, we were met by Lucy’s friend Serena, who’s absolutely great! She helped us with directions as we rented Europcar, and then proceeded to our hotel. Actually, we had an apartment at Pacific International, so we had a kitchenette to work with! The place was nice, we had an excellent view of downtown, and lots of sleeping accommodations. After buying food from the local IGA (costing a small mortgage), we relaxed our first day.

We find out Australia is known either as the world’s largest island or the world’s smallest continent. It’s weird to know that an 8-10hr trip South, and we’d be in Antarctica. It’s also known as having “four seasons in a day”. In the morning, cold, 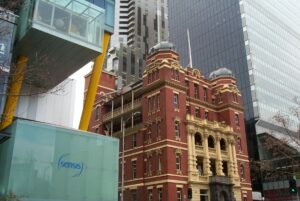 wet, but my midday, partly sunny or sunny, afternoon, sunny and a bit lukewarm, then warm and clear by evening. Amazing. Melbourne is quite nice and very metropolitan. The architecture is great. Lots of Byzantium and Colonial Empire structures, interspersed with Art Deco buildings and New Wave. Some of the stuff (like parking) is expensive…$24/day. (Lucy insert: We’d think this was a steal for parking in a downtown today. lol) Mass transit and walking is greatly encouraged here. Not many bikes, but lots of trams. And to complement my “Amazing Bathrooms of the World” collection, they have metro toilets that make America’s Honey Buckets look like…well, honey buckets.

On Tuesday, we decided to iron clothes, bu 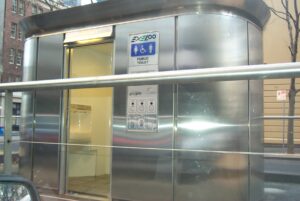 t the iron had different plans. After narrowly missing scalding Lucy, it then proceeded to take a leak on the table, soaking my “Disco in Maori” translation book. The hotel was very good about replacing the iron, and compensating me for the book. We spent a good afternoon driving in Melbourne’s Business District, pretending to get a feeling about the city, but actually getting confused between names like “Bourke Street” (pronounced as “that road that’s the size of a small moped”) and “Little Bourke Street” (pronounced as “not Bourke Street, it’s totally different, OK?”). Since there’s tram service in the CBD, right turns are done a little differently here. 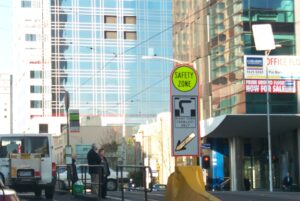 The planners decided that traffic should not be held up for people taking turns. So instead of having a right turn lane in the central reservation area of the road (US drivers, hang with me on this, it’s the equivalent of our left turn lane), the right turn lane is an extra lane TO THE LEFT of the road. To execute the “Hawk Turn”, on the green, the person pulls into the leftmost lane, pulls out into the intersection (along with the 12 other cars turning), looks for traffic in both directions using your mirrors and front, waits until the light turns yellow for the intersection to clear, last minute cars still going, light turns red, traffic starts towards you at your right and left, you panic and scream and careen across all 5 lanes of traffic, narrowly missing cars and trams going in both directions. It’s as simple as that.

This maneuver is not performed often. I figured that instead, 3 lefts make a right. I seemed to do OK driving on this trip…if you don’t count the 3 times I stopped (not slowed, STOPPED) in traffic when I got confused which way to turn. If you’re driving nearby, it should be easy to spot me. I’m the one blocking traffic. 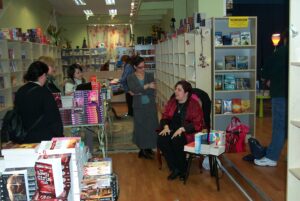 We spent Tuesday with Lucy doing the signing at Rendevous Books, a nice shop on Lonsdale and Elizabeth Streets. We also did some shopping in the nearby Greek District. Like many large cities, Melbourne has a Greek, Italian, Victorian, and Chinese districts, along with others. And interspersed among these shops are zillions of “Australiana” shops, where you can get specialty items like boomerangs the way they used to make them…out of plywood. (Insert from Lucy: There were shops that sold handmade boomerangs too, he just doesn’t mention those.)

You can also eat at many small cafes or restaurants. We bought luggage for me and Zach (the wheels gave out on our luggage on the way in…ugh) and some souvenirs. I decided to wait on a hat, they just didn’t have a big enough brim for my liking…but I did get an Aborigine symbol book and art stuff, you know me and languages/writing (“Excuse me, is this your dingo?”). At the end of the day, we were beat. Also we saw humor in some of the Australian decor souvenirs…just ask Zach sometime why he thinks a didgeridoo is so funny. For me, the didgeridoo is an interesting musical instrument. Basically, you take a wood branch, have it infested by termites until it’s hollow, clean it out and polish and paint it, then blow into one end as you inhale and exhale, and you get an exact duplication of a 50 or 60hz AC hum. Well, at least that’s how it sounds at first, but it actually can do a variety of 50/60hz AC hums. I got a CD of the music, it is quite good.

We decide to do pit stops, but find that the only bathroom for most of Melbourne is at Myers in the Strand Mall. Lucy’s trusty assistant Abigail and I decide to check this out. We stop at several shops, every one of them pointing to Myer’s as “the bathroom for the public”. So we rush in, I tell Ab “OK, you go to yours, I’ll go to the Men’s, meet you out here in 10 minutes.” Except, no Men’s room.

So Ab goes in, I ask a clerk, who says “No problem, it’s on the second floor, can’t miss it.” Great! Go to second floor…I miss it. Ask another clerk. “Oh, it’s around that corner, you can’t miss it.” OK. Turn the corner…not there. Third clerk: “It’s behind that wall over there, you-” Yeah yeah, I know. Finally I find it, with a hastily-scrawled “men’s” and an arrow. Works for me. How the population of Melbourne coordinates using one bathroom is beyond me, but hey, I’m impressed. 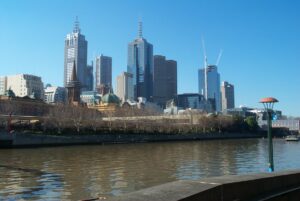 Wednesday, we walked across the Yarra River (164) and shopped some more. That night, we went to Serena’s for dinner, where I met her husband Ed…who’s as diehard a comic book, sci-fi nut as I am! We also met up with Michael and Iris, Josie, Marty and Nicki, and just had a famous time. The kids seemed to get along also…at least, I know no firearms were discharged that evening…we definitely had a fine time.

We relaxed Thursday morning, then had lunch at the Blue Train cafe on the waterfront, Southgate. It was a quiet little lunch, punctuated only by the constant and maddening 130 decibel drilling that was happening 10 feet from us…we hurriedly finished and left. Later, we found our favorite shop back home, Target, and shopped it clean.

Melbourne has done a lot of improvements in the past few years, and is a real up and coming city.  To give the impression that they are constantly improving, they have developed a method of staging improvement projects and roadworks wherever you go. So, when I get up in the morning, I’m met by jackhammers as they remove the sidewalk downstairs. When I go to town, the first crew radios the second crew, who then start up hammering on a nearby store display I’m passing. When I decide to eat, the last crew radios the Restaurant Improvement Crew, who then start concrete drills next to me as I eat lunch. There is NO DOUBT in my mind now that Melbourne is a constantly improving…and noisy…city. 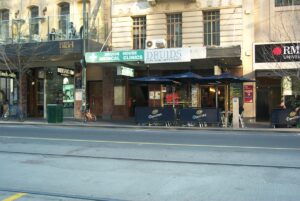 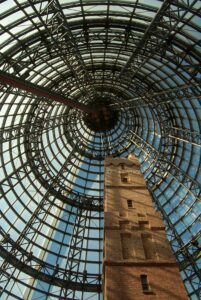 Lucy taught workshops on Friday, so the kids and I went to the Melbourne museum and looked around….very impressive. Lots of Aborigine displays, along with an IMAX 3D film on Sharks and something called the “virtual room”, where museum displays are projected in 3D, you wearing polarized glasses….way cool idea. We also find out that the Druids have come a long way since Stonehenge . We shop at Melbourne Central, 4 floors built around an old brick factory. We then go and get dinner with Lucy, then the kids lounged at the apartment (oh look, reruns of “Hogan’s Heroes” again) as we attended a cocktail party at the Langham. The theme was “The Raj”, so Lucy were decked out in our embroidered garb. We got to meet old acquaintances (like Elliot and Barbara, Helen), people we just met in NZ, and new folks. It was a nice night out. Lucy’s editor Kim had attended in NZ with us, and met us again at the party, very cool.

Lucy’s cellphone charger finally gives up the ghost on Thursday, so I go in search of an Australian equivalent. At Dick Smith’s Electronics, the clerk proudly shows me the true charger replacement, which is 2 feet long, requires monster cabling and my own power substation, for only $100. I say no thanks, go next door to a nondescript cellphone shop, I get one about the size of my fist for $35. It pays to shop around. 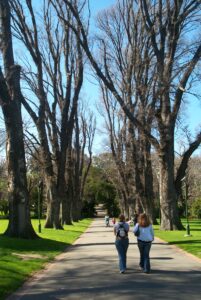 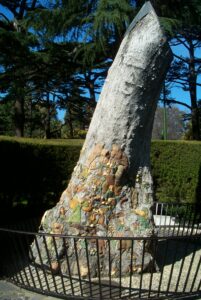 Saturday was another conference day for Lucy, so the kids and I went to the Victorian gardens near the hotel. I was impressed by the large rows of old trees that went through the parks. In one, there were tropical plants and trees in a small valley, so literally you turned the corner and were in another world. We also saw the model Tudor park, some neat fountains and a gazebo, and the Fairy Tree, where you can make a wish. Unfortunately, the Fairy Tree took forever to find, because it’s actually been cut down, so it’s really the Fairy Stump; apparently the Fairy Tree did not get its own wish. But the carved fairies in the trunk were very impressive. We then visited the Hard Rock Cafe (which has the friendly words “No Smoking or Nuclear Weapons Allowed” in front), then ate at KFC (where a man kept poking Ab’s Penguin backpack, saying “Hurry up” to the penquin…) rounded up with more shopping (surprised?), got the kids something to eat (McDonald’s which offers the “McOz” burger, complete with pickled beet slice).

Lucy and I attended the Awards dinner. There, we got to hear Emma Darcy’s amazing speech on the Emma Darcy award, complete with the famous “F” words (ask her what they are), and some great awards for the writers Down Under. I am very impressed with Australians, they have a great sense of humor and forthrightness about them, very refreshing.

Sunday, we find out the wizard’s red shoes don’t work, so we fly back through Auckland and LA, back in good ol’ Oregon after about 24 hours in the air, and get to go through Sunday twice, due to crossing the International Dateline. The ever-diligent Lucy wrote as we flew back.

You may ask, why didn’t we go out of town, see some outback while we were here? Well, I’ve decided that on vacations, I’m going to maximize experience time, not travel time. So since Melbourne was an incredible rich city full of stuff and many friends were staying here this week, I decided this trip to concentrate on experiences there. In other words, I was lazy, and had no desire to directly experience the most venomous predators on the planet that reside in the Outback.

Next time we come back to Australia (and we will!), we’ll hit Sydney and other places, and plan more country travel.