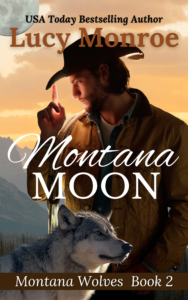 Duke McCanlup isn’t like his younger brother, or his father. He has no problem with claiming his human mate…other than the fact Leah Donegal wants nothing to do with him. Six months ago, he made a mistake and she left him.

She’s back in town for his brother’s wedding and Duke has less two weeks to claim his mate, or lose his chance to control his change forever. Duke was born to be alpha, but his pack will never accept him if he can’t control his change. He’s determined to unseat his father and bring the pack into the 21st Century, for all their sakes.

Leah’s no pushover. She can’t turn her back on Duke, or his pack. He’s asking for one night, but they’re mates. How does that even work?

Note: The Montana Wolves are contemporary paranormal romance books in the modern Children of the Moon world, but no characters from the historical books show up in them.

This book has been published as serialized fiction on Kindle Vella, with author notes for each episode. However, while the ebook and paperback edition will not have the author notes, they will include an epilogue featuring the main characters from both Come Moonrise & Montana Moon.

For an excerpt, read the first three episodes for free on Kindle Vella.

Chapter One will be posted here 30 days after the last episode goes live on Vella.