The Call from Harlequin Presents came at 7:20 in the morning on September 27th, 2002…but that’s not when it all began.  Some authors write a selling book their first try.  My friend and mentor Theresa Scott is such an author…I’m not.  I wrote twelve manuscripts before the one I sold to Mills & Boon.  I’d been writing and submitting books for about 9 years and seriously pursuing a career as a romance author for most of them.  That equals three hanging file folders of contest judge comments, a rather full file of editor rejections and a matching one for agents.  It also means I’ve attended many conferences, both regional and national, numerous workshops, listened to dozens of tapes and experienced the best and the worst the world of critique has to offer. 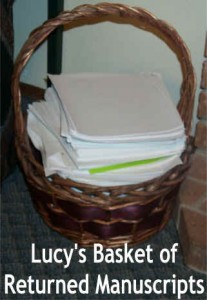 There were times over the years I wondered if I would ever sell…if I were capable of writing a selling novel.  Those times of doubt would have devastated me if I hadn’t had my “file of good thoughts” to fall back on.  That file is a compilation of some very special mementos to mentorship that kept me believing in myself.  My mom’s email saying, “You will publish one day.  Believe it.”  A pen from my critique partner with my pseudonym engraved on it, with the belief I would one day publish and use it to sign my first contract.  An email from Sandra Marton saying she believed I would make it.  A card from my mentor, Debbie Macomber that affirmed who I was as a person as well as a writer.  A drawing my husband did that affirmed his belief in my vision.

If you are where I was, I urge you to make a memorial to future success…small and big mementos that remind you that others believe in your dream and so must you.

I met my editor at the RWA National Conference in Denver and pitched my manuscript “The Greek Tycoon’s Ultimatum” (October 2003 Harlequin Presents) to her.  She was excited by the story idea and my knowledge of the line.  She asked for a partial, which I sent to her on my birthday a couple of weeks later.  A week after receiving the partial, she emailed, requesting the full.  I sent it to her immediately.  A week after she received it, I got another email saying she wanted revisions and would call to talk them over.

That phone call was one of the most exciting moments of my life…it wasn’t just about possibly selling a book.  It was about becoming the best author I could be, getting concrete editorial input to improve my story.  I was ecstatic and did the revisions over the next two days.  I sent them back and … Kim called to buy the book that beautiful September morning.

A little over a year later, I got another Call from Kate Duffy at Kensington Publishing and believe me when I tell you that this call was no less exciting than the first.  A lot of people believed I could sell a book, but almost everyone I told my dream of writing for more than one publisher right away warned me off of it.  My dear friend, Lori Foster was one of the exceptions.  She passed on my first published book, The Greek Tycoon’s Ultimatum, to her editor, Kate Duffy,  to read.  Kate read it and emailed me to say she planned to read everything I published from there on out.  I emailed back to ask if that might possibly include what I hadn’t published…I had a single title for her to look at.
Incredibly in November 2003, Kensington bought that single title in multi-book contract along with four novellas for the Brava imprint.  A month later they bought two more single titles for the Zebra imprint.

And in early 2004, I got the call
from Berkley for my first historical.   I have a Regency era
trilogy coming out with them and then a Regency werewolf story.
There are no words to express my joy in selling to the subgenres of
romance I dreamed of writing in…I love my job! 🙂

I have no idea what the future holds, but I do know that the story doesn’t end here.  I’ve just started on this incredible journey and I hope you’ll share it with me.

My sister KT wrote this poem for me the day I got “the call” from Harlequin:
Your gift for words is a ray of sunshine, only equaled by your radiant outlook.
Now an editor has seen your light, which allows the world to be blessed by your book.
And now your joy in romance will always shine when between the pages of your book they’ll find…
An escape of the most pleasant kind…
The world of Romantic Fiction!