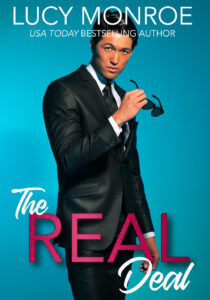 The most important thing in Amanda’s life is negotiating a successful merger between her company and Brant Computers, a family-held competitor.

It should be a done deal: Company president Eric Brant is on board with the idea. But when Amanda arrives in Eric’s office, it is his cousin Simon Brant who greets her-and Simon is anything but agreeable. He’s not about to give up control of the family company or lay off loyal workers. Squaring off against the sexy, brilliant, sexy, obstinate, sexy, eccentric, not to mention sexy Simon is completely frustrating-and a total turn-on. And when he walks out on her presentation, sidetracked by another one of his brilliant ideas, Amanda is shocked…and intrigued…no, furious!…and…and…and so attracted she can barely enter data into her tablet…

Simon has never met a woman as passionate and driven as Amanda, or as devastatingly attractive. He can’t decide if he wants to put her on the next plane home-in the cargo hold-or kidnap her and spend a long weekend showing her exactly the kind of negotiating he likes best. Come to think of it, if the lady wants war, maybe they should engage in full-on battle…in the bedroom…and see who will be the victor.

But when intimacy leads to an explosive passion, it might be time to think of a different, more permanent kind of merger…one that’s less about business and all about pleasure…

“Monroe’s wonderfully written, must-read romance features characters you ache for as though their emotions were your own.” –  Maria Hatton, Booklist Copyright © American Library Association. All rights reserved

“This delightful, witty story of an attempted corporate takeover blends just the right amount of sexiness with a well-written plot.”- Affaire de Coeur

“Awarded The Road to Romance Reviewer’s Choice Award, The Real Deal is just that from a talented author who really had her readers in mind when writing this one.  Hot, exciting, wonderfully written and should not be missed! ” –Road to Romance

“The Real Deal is sweet, funny, sexy, and satisfying to the very last page. I really didn’t want to let Amanda and Simon go and trust me neither will you.” 5 Stars – A Romance Review

“THE REAL DEAL has one of the best, funny, opening scenes that I’ve read in a long long time that still makes me chuckle whenever I think of it!” 4 Stars  – The Romance Readers Connection

“A FAR Recommended Read, The Real Deal opened with a scene that had me absolutely howling with laughter and it only got better. Ms. Monroe touches on issues that all women can relate to when dealing with men and relationships and as a result has earned both my respect and a place on my auto buy list.” – Fallen Angel Reviews

“Whatever else you do this fall you don’t want to miss the fabulous hot romance called THE REAL DEAL, which is the best deal you’ll ever read.  Lucy Monroe’s characters jump off the page right into your heart.”  — ReaderToReader

“This fine cast of characters, a wonderful plot that goes deeper than the actual merger, and the coming together of two people completely ideal for each other all play together to make THE REAL DEAL a fantastic book, one headed for my keeper shelf.” – Sizzling Reviews

“THE REAL DEAL is definitely finding a home on my keeper shelf, in fact, I think I’m going to have to create a whole new shelf for future Lucy Monroe books. – The Best Reviews

The Real Deal is a wonderful book about a woman overcoming an emotionally abusive past, while finding herself and finding love.  It is interjected with just the right amount of humor and plenty of hot love scenes. I give it the very highest recommendation. ~ Laurie, Sensual Romance

The sensual, steamy scenes shine in this skillfully written story. Set the air conditioning to cold and grab a pitcher of ice water. You’ll need it! – Blue Ribbon Reviews

THE REAL DEAL should be on the shelf of every woman. This is such a rich, emotionally-charged, sensual and highly satisfying book.  – CataRomance Reviews

The Real Deal is a delightful story. The plot is well developed and Lucy Monroe once again displays her talent for developing three-dimensional characters that are unique and likable (I loved the butler!).  – Sensual Reviews

what other AUTHORS and BOOKSELLERS are saying…

“I read it — consumed it, really — in one day and absolutely adored it.  What a fabulous book!  I highly recommend it!!!!!” – Kati Carthum, science fiction author

“Lucy – I am groggy today, and it is all your fault!  I went to bed  last night at about 11:30, hoping to read for thirty minutes and then fall asleep.  Hubby was out of town, so I could indulge myself in The Real  Deal.  When I looked at the clock it was 1AM!  Augh… can hardly  keep my eyes open today…yawn…Love your setting… can’t wait to read more…” – Janice Maynard

“What the hell is the matter with you, Eric?” The deeply masculine voice came out in even tones, but was laced with unmistakable anger. “This is a family held company. Merging with Extant would destroy everything our Grandfather and fathers built here.”

“Nonsense.” Eric’s voice sounded conciliatory, but louder than the other man’s. “Look, Simon, you promised to give her a fair hearing and I’m holding you to your word.”

“I would have promised anything to get Elaine to turn off the waterworks, including listening to some snake-oil salesman’s pitch.”

“Our arguing upset my wife and Amanda Zachary is no snake-oil salesman.”

Before the other man could respond, the executive assistant had knocked on the already opened door.

There were two men in the room. One stood in front of the windows so his face and expression were cast in shadow, but she could tell he was big, easily six-foot-two.

The other man wasn’t quite so massive. His sandy brown hair and engaging smile gave him a look of boyish charm, but his blue eyes glinted with unmistakable intelligence. “Thank you, Fran. We’ll take it from here.”

The other woman turned and left. For one completely insane moment, Amanda wanted to call her back. The brooding presence of the man by the window unnerved her.

Then Eric caught her attention by coming forward to take her hand. “It’s a pleasure to finally meet you, Amanda.”

She shook his hand, being sure to grasp it firmly. “The pleasure is mine. I’m looking forward to our discussion.”

Or rather, she had been before this other man had entered the equation.

Eric released her hand and turned slightly. “Amanda, this is my cousin Simon Brant. He’s in charge of research and development for Brant Computers. Simon, this is Amanda Zachary, the representative from Extant Corporation.”

Simon stepped away from the window and she got her first clear view of the man. She knew her negotiators smile had slipped a little, but she couldn’t help it. Simon Brant was a force of nature. Dark exotic looks mixed with a smoldering presence in a Molotov cocktail that set something on fire inside her she was absolutely sure no longer even existed.

Desire. Hot. Molten. Unstoppable. And it washed through her body as if her receptors had forgotten, or never even known, she wasn’t a very sexual person. She felt betrayed by her body. Now was not the time for it to rediscover long dormant feminine hormones.

Everything important to her was on the line with this deal.

“M-Mr. Brant.” Great. She’d stuttered. She never tripped over her words, not since going through an endless series of speech therapy sessions as a child. However, she’d never met a man who looked like a cross between a Scottish warlord and Apache chief before either.

She put out her hand and wished to Heaven she’d ignored the urge for politeness when his big, warm fingers enclosed hers.

For the space of seconds, she didn’t speak. Couldn’t speak. Something elemental and downright terrifying passed from his hand to hers as he completed the shake.

“Call me Amanda.” The words slipped out, unbidden. She wouldn’t have taken them back if she could. It would be awkward to have his cousin calling her by her first name while Simon stuck with the more formal address.

He dropped her hand, his gray eyes roaming over her with tactile intensity. “Simon.”

That was it. Just his name, but she knew what he meant.

“Now that the introductions are over, why don’t we all sit down?” Eric’s voice sounded far away and Amanda had to force herself to decipher the words before nodding her agreement.

Despite the fact it was Eric’s office, Simon led the way. He waited for her to sit in an armchair across the room from Eric’s large executive desk. Eric and Simon sat at either end of the matching black leather sofa, with Simon taking the end furthest from her. She should have felt relief that his choice had given her a reprieve from his proximity, but the angle at which they sat gave him a clear view of her and vice versa.

It was an effort to turn her attention to Eric. “I didn’t realize your cousin would be joining us for the meeting.”

“It’s a family held company, Amanda.” Simon gave special inflection to her name. “I’m family and I happen to own a sizable chunk of the business.”

“I see.” She smiled tentatively. “But I had the impression from Eric that none of the other family played a principal role in management of the company.”

“That’s true.” Eric gave Simon a hard look. “I’m the president of the company and my cousin rarely shows interest in my day to day decision making.”

“I don’t call proposing a merger with one of our chief competitors your average day to day decision. Wouldn’t you agree, Amanda?”