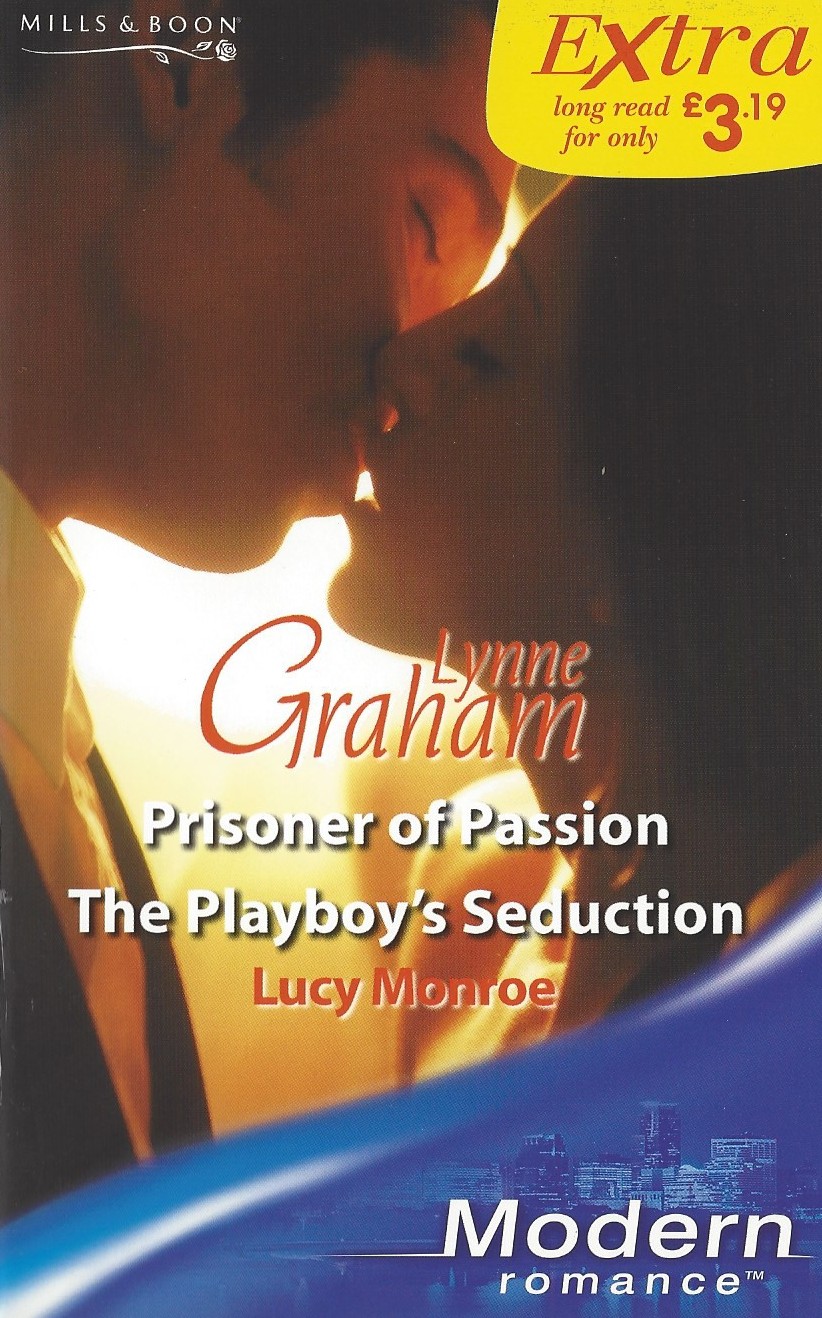 Bethany’s plan was to travel to Rome, find a gorgeous Italian, have a week long affair and return home reassured she was not the passionless prude her ex thought she was. When Andre, a luscious business tycoon, crosses her path, it seems her plan is set in motion. But is there more to this fling than just what’s between the sheets…?

Originally published in 20o4 as an online read on eHarlequin.

“Have read this book three times and i loved it every time. I like the fact that the heroine stands strong against the hero and is not a total pushover. Loved the feisty dialogue and the various Shakespeare quotes.” ~reader reviewer, amazon.com

“I really enjoyed this story especially after having picked some really riduculous Harlequin novels. I liked both characters especially the heroine and the story line was good. I would definitely recommend”~reader reviewer, amazon.com

Bethany rushed back toward the quaint but expensive café where she’d eaten lunch, hope, frustration and worry playing an out of sync symphony along her nerve endings.

She’d been in Rome three days. Beautiful, warm days during which she’d spent more time getting lost than sight seeing and not one of which had taken her a single step closer to her goal. The plan to come to Italy, meet a sexy man, have a week long fling and go home with the certainty she was not the passionless prude her ex-husband had accused her of being had been crazy from the start. Her mother hadn’t agreed of course, having come up with the plan to begin with. She’d also given Bethany the all-expenses paid trip to Rome along with a boatload of advice on improving her image and a strong recommendation to have a no-strings affair.

Coming from the rather conservative, shy woman who had spent thirty years married to the same man, the suggestion would have been hilarious if it hadn’t been so shocking.

Not wanting to hurt her mom’s feelings, Bethany had taken the self-improvement advice. She’d spent a hundred dollars having her mousy brown hair shaped and high-lighted, another thirty on a “Belly Dancing in a Box” kit, and several nights using the castanets and tips included to try to get in touch with her more sensuous side. She wasn’t sure how much good it had done, but she now knew how to roll her hips with the best of them. She’d also had her very first pedicure so her toenails looked good in sandals.

None of which appeared to have done a bit of good in making Bethany appear any less boring to the opposite sex than her ex had accused her of being.

Shoving open the door to the small café, she propelled herself inside and ran smack into a wall. She didn’t remember there being a wall opposite the entrance when she’d been here earlier.

Dazed, she contemplated that oddity as the wall shifted and two warm hands came down on her shoulders. “Scusi. Siete guisti?”

She lifted her head, and met dark brown eyes in a face Angels would envy. She’d never met anyone this gorgeous in her life. Not even her ex, Kurt was a patch on this guy. He’d been pretty boy handsome, but this Italian Adonis was all masculine maturity. Not that he looked old, quite the opposite. He couldn’t be more than thirty, but there was a wealth of sophisticated knowledge in his gaze she doubted she would have when she was ninety.

“I’m sorry. I mean, perdonilo prego,” she said, repeating one of the phrases she’d learned from the set of Italian tapes her mother had insisted she listen to on the plane ride over.

“You are English?” The sexy voice reached a place inside that hadn’t been touched in two years of marital intimacy and it was all she could do not to shiver.

His hands squeezed her shoulders, but he did not push her away and she made no effort to move back.

“You have no need to apologize.”

“I wasn’t looking where I was going.”

“For this, I am grateful.” He smiled, the implication of his words and look of male appreciation in his eyes unmistakable.

An invisible vacuum sucked all the air from her immediate surroundings, leaving her light headed and incapable of response to his flirtatious comment.

His smile grew, sending her heart rate into the stratosphere. “You came through the door very quickly.”

“Oh, yes. I am, in a hurry that is… I forgot my purse here earlier and didn’t realize it until I was at the subway station wanting to buy a ticket,” she babbled.

His expression turned grave. “This is not good.”

“No.” But at the moment she couldn’t quite remember why.

Someone said something behind him and he turned, his hands dropping from her shoulders. He apologized for blocking the exit and then slipped an arm around her waist as naturally as if they’d known each other years and used it to guide her away from the door. A couple walked past them. The woman, a glamorous brunette who resembled a young Sophia Loren, gave Bethany a look of speculation tinged with envy as she passed by. Considering the fact she was with a pretty fine specimen herself, the envy surprised Bethany.

But she didn’t dwell on the strange look long. She couldn’t, not with his hand still attached to her waist. Sparks of excitement shot from where his fingers rested against her ribcage to the rest of her body in an electric reaction she’d never experienced before. She’d read about instant sexual attraction, but she’d never felt it and nothing she’d come across in books came close to conveying the sensations zinging along her nerve endings right now. She could barely breathe and it was a safe bet her brain wasn’t functioning properly.

That was probably why she still hadn’t done anything about reclaiming her purse. “I need to…” Her voice trailed off as their gazes met again.

“I will ask about your bag.”

He took her with him, his hand firmly curled around her waist…and she let him.

The possibility he did not feel the overwhelming sexual chemistry dominating her senses tried to form as a solid thought in her head, but she rejected it. Something this powerful could not be one-sided. Could it?

The owner, a short, rather round man with a friendly air, produced her purse with a big smile and voluble Italian when her companion asked about it.

Handing her the pink and black bag barely bigger than a wallet, he admonished, “You should take better care, signorina.” He shook his head. “What would have happened if I had not seen it sitting on the chair, I will not guess at.”

“It would no doubt be gone by now,” the man by her side replied.

She shot him a sideways glance, wondering if he thought she was some kind of idiot for leaving it behind, but his expression was serious, not condemning.

“I don’t keep my passport or most of my money in it,” she said in her own defense. “Just a few Euros, my driver’s license for identification and a credit card.”

“Look to see it is all there. Antonio may have seen your purse after someone else did.”

She nodded and then did a quick rummage through the contents. She wasn’t worried about the make up and other girly stuff she’d only taken to carrying since her arrival in Italy, but none of it appeared to have been disturbed either.

She looked up at the café owner and smiled. “It’s all here.”

He nodded, puffing his chest out. “I see it almost the moment you get up from your table and put it behind my counter.”

“Thank you.” She took some money out to give Antonio as a thank you, but he waved it away.

“No, signorina. It is my pleasure to help such a beautiful woman.”

She laughed, shaking her head at his typical Italian exaggeration. “Well, thank you, anyway.”

“You do not believe him?”

“That it is his pleasure to help? I don’t doubt it. He seems like a very nice man.” And she smiled again at the proprietor. “You’ve really saved me a lot of hassle. Thanks.”

“Ah, so it is the part about your beauty you discount?” her knight errant asked teasingly.

She shrugged, the feel of her arm brushing his torso as she did so temporarily waylaying the synapses connecting her brain to her mouth so she had to remember what he’d asked before she could answer him.