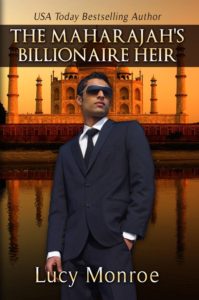 Two people leery of love agree to marry for every reason but, only to discover a red hot passion between them and something more, something neither expects…feelings.

Eliza lost her family as a young child and has never been able to give the guardians who love her as their own the trust and love she gave her parents.  She is raised as the beloved daughter to the eldest son of the Maharajah with the expectation that she will marry his nephew and heir.  Only tragedy strikes again in her life and she loses her best friend while the Maharajah loses his heir.

Rajvinder has never been acknowledged by his royal family back in India, but now they need an heir and even an illegitimate one will do.  He’s offered the chance to take his rightful place in the family as heir to the Maharajah.  The only stipulation is, he has to marry Eliza, the woman raised to be princess in the palace that should have been his home.

Vin is a self-made billionaire and does he want his rightful role?  Yes.  But he has another agenda, one he keeps secret from everyone, including the woman learning to love again as his fiancée. History will not repeat itself and Vin’s going to make sure of it.

But will his wife-to-be accept that Vin’s plans don’t align perfectly with the family that raised her since her parents’ deaths?