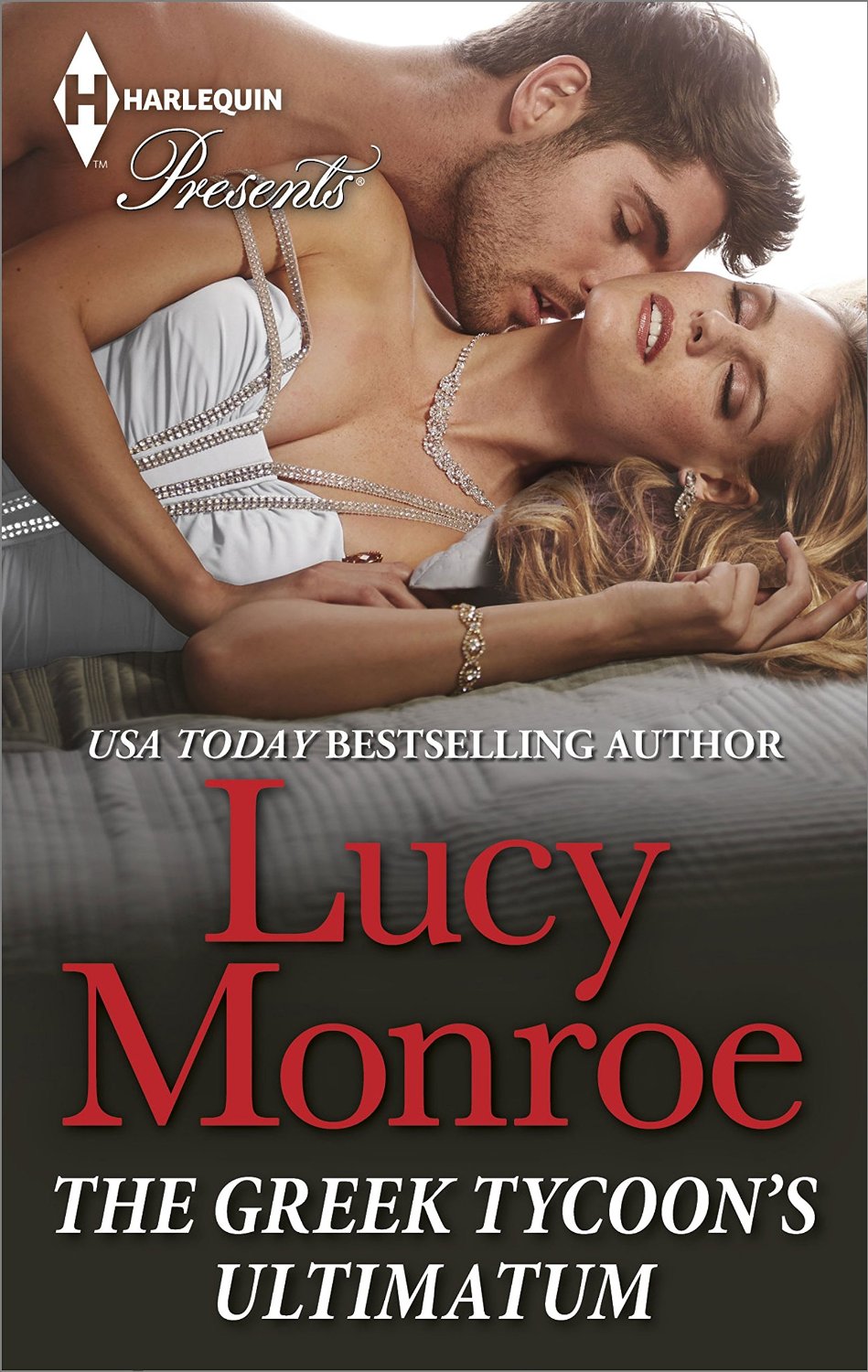 The Greek tycoon demands his bride!

Savannah has returned to Greece with the intention of making her peace with the Kiriakis family. But Leiandros Kiriakis still believes the lies about Savannah and is set on making her pay for the past.

Savannah is reluctant when Leiandros demands that she share his home. As for Leiandros, now he has Savannah right where he wants her. And in a short time he’ll be giving her an ultimatum: if she doesn’t want to lose everything she holds most dear, she’ll agree to be his wife!

“I enjoyed getting to know Savannah and Leiandros while they were learning about each other.  I loved everything about THE GREEK TYCOON’S ULTIMATUM – the characters, the plot, and the beautiful descriptions of Greece.  I am looking forward to more from Lucy Monroe!” ~ Alane Coppinger for Blue Ribbon Reviews

“An excellent debut novel — well paced, sparkling dialogue.  Lucy Monroe has captured all of the elements of a good romance as well as a good novel. Her characters are well developed, the plot is well paced, and the dialogue sparkles. Whoever reads this novel will look forward to Ms. Monroe’s future works.” ~ Angela Black, Sensual Romance Reviews (To read Angela’s complete review, click here.)

“The Greek Tycoon’s Ultimatum is a sensational debut by brand new author Lucy Monroe.  The sexual tension between Leiandros and Savannah is scorching… I so loved this story, I think I’m going to go and read it again right now.” ~ Dawn Brookes for CataRomance

“This debut book really rocks!  I was simply fascinated with this story and couldn’t wait to see if and when Leiandros would finally redeem himself. Lucy Monroe’s debut book couldn’t have been any better!” ~ Kathy Boswell, The Best Reviews  (To read Kathy’s complete review, click here.)

“Presents fans, rejoice, and take note: Lucy Monroe will soon be a shining  star within the Presents line. THE GREEK TYCOON’S ULTIMATUM is a fabulous  read with all the elements beloved by Presents fans: alpha hero,  strong heroine, scorching sensuality, and exotic setting. Ms. Monroe understands alpha heroes and what readers want because though Leiandros is definitely alpha, he isn’t cruel or abusive, and he does indeed crawl when he discovers the truth about his misconceptions and absolutely melts your heart. If you haven’t read a Presents lately, or are new to the line, THE GREEK TYCOON’S  ULTIMATUM is the perfect introduction. Highly recommended.”   ~  4 1/2 Hearts  ~ Debora Hosey, The Romance Reader’s Connection  (To read Debora’s complete review, click here.)

“I love this book. I am glad it’s on the kindle so I can re- read it whenever I want” ~Melissa, amazon.com reader review

“This was a read I thoroughly enjoyed and I have been reading harlequin novels for many years. I don’t like sharing too many details, they can be found easily in other reviews if you want them, but it is one I will read again. I don’t do that often. My favorite are stories that are centered around Greece as this one is. I enjoy Lucy Monroe’s books and this one is a favorite. The plot and storyline were nice,and the characters very likable, you want them to be together. I especially liked the love interest in this one..he was confident,successful, arrogant, and of course good looking, but still displayed love, the role of protector and tenderness throughout the book. The main character was smart and displayed strength, courage, and generosity. I easily wanted to see her end up happy” ~KGirlNC, amazon.com reader review

Flinching as the words hissed venomously from her sister-in-law’s lips, Savannah Marie Kiriakis forced her gaze to remain fixed on the emerald green grass in front of her.

The traditional Greek Orthodox graveside service was over and everyone had paid final respects, everyone but her. Poised on the edge of the grave, a single white rose in her hand, she tried coming to terms with this – the final end to her marriage.

Relief warred with guilt inside her, forcing out the petty irritant of Iona’s verbal attack.

Relief that her own torment was over. No one would ever again threaten to take her children. And guilt that this should be her reaction to the death of another human being, particularly Dion – a man she had married in good faith and youthful stupidity six years ago.

“What right has she to be here?” Iona continued when her first sally was not only ignored by Savannah, but also by the other mourners.

Dion’s younger sister had a flair for the dramatic.

Unbidden, Savannah’s gaze sought the reaction of Leiandros Kiriakis to his cousin’s outburst. His dark eyes were not set on Iona, but focused on Savannah with a look of such contempt if she’d been a weaker person, she would have been tempted to jump into the grave with her dead husband.

She could not turn away, though her heart and emotions were screaming inside for her to do just that. Leiandros’s contempt might be justified, but it hurt in a way that Dion’s frequent infidelities and bouts of violent temper had not.

The smell of fresh earth mixed with the floral offerings covering the now closed casket assailed her nostrils and she managed to shift her gaze to her husband’s grave.

“I’m sorry,” she whispered soundlessly before dropping the rose she carried onto the casket and stepping back.

“A touching gesture, if an empty one.” More words meant to wound, but these delivered directly to her with the sharp precision of a stiletto aimed at her heart.

It took every bit of Savannah’s inner fortitude to turn and face Leiandros after the way he had looked at her a moment ago. “Is it an empty gesture for a wife to say her final goodbye?” she asked as she lifted her head to make eye contact.

And wished she hadn’t. Eyes so dark, they were almost black, blazed with a scorn she knew she had earned, but nevertheless grieved. Of all the Kiriakis clan, this man was the only one with legitimate reason to despise her. Because he had firsthand knowledge of the fact she had not loved Dion, not passionately and with her whole heart as a man like her husband had needed to be loved.

“Yes empty, when you said goodbye to Dion three years ago.”

She shook her head in instinctive denial. Leiandros was mistaken.   She would never have risked saying goodbye to Dion before fleeing Greece with her two small daughters in tow. Her only hope of escape had been to board the international flight for America before Dion realized she was gone.

By the time he had tracked her down, she had filed for a legal separation, thus preventing him from spiriting their children from the country. She had also filed a restraining order, citing her healing bruises and cracked ribs as evidence that she was not safe in Dion’s company.

The Kiriakis clan knew nothing of this. Even Leiandros, head of the Kiriakis Empire and thus the family, was ignorant of the reasons for the final break in Dion and Savannah’s marriage.

Leiandros’s sculpted face hardened. “That’s right. You never did say a final goodbye. You wouldn’t give Dion his freedom and you wouldn’t live with him. You were the kind of wife nightmares are made of.”

Each word pierced her heart and her sense of self as a woman, but she refused to bow in shame under the weight of his ugly judgments. “I would have given Dion a divorce at any time over the last three years.” He had been the one to threaten to take their daughters if she made good on her intention to file for permanent dissolution of their marriage.

Leiandros’s face tightened with derision and she felt the familiar pain his scorn caused. His opinion of her had been cast in stone the night they met.