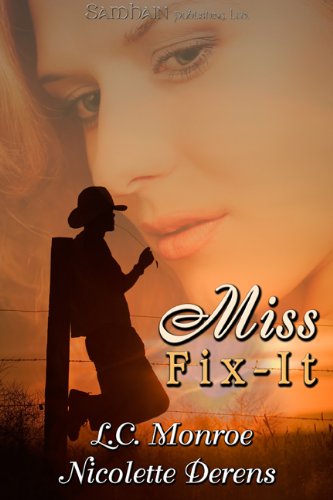 She excels at fixing everyone’s life—except her own.

Virginia Pembrook can never leave well enough alone. Her mission in life is to make everything right in the lives of the people she loves. She sees it as helping the Lord out with His perfect plan.

Ginney and her mother travel West to visit her cousin in Oregon. Ginney can’t wait to arrive—she knows who awaits her there. Caleb Jasper, the childhood friend for whom she is sure she is the perfect life-long helpmate.

She arrives to find Caleb a changed man, steeped in self-inflicted misery and ignoring the call of God in his life.

Having abandoned his dream to become a traveling preacher, to instead take over running the family ranch, Caleb has given up on the foolish and idealistic notion that God will take care of everything. Faith, he reasons, is no guarantee of happiness. And, much as he has missed her, Caleb is certain that ranch life is no life for the city-bred Ginney Pembrook.

Ginney, the original “Miss Fixit”, has her work cut out for her.

“L. C. Monroe & Nicolette Derens have brought a beautifully written romance to the readers. Miss Fix-it is a fantastic read. Ms. Monroe and Ms. Derens will touch your heart with Virginia and Caleb‘s story of love and faith.” ~ Sonya, FAR

“MISS FIX-IT is a refreshing story of love and trust with characters that are vibrant and real; drawing readers into their story.” ~4 Stars ~ Donna, eCataRomance.com

“I like that even though the characters are all strong they all have weaknesses, and that they need help. This is a good example that even strong Christians can lose site of where God wants them.” ~ Tori, Joyfully Reviewed

“There were so many things that I loved about this book.” ~ Missy, FAR

by L.C. Monroe (with Nicolette Derens)

“He is,” Ginney agreed. “And very knowledgeable about the Scriptures.”

“Well, I would hope so,” Caleb muttered, pulling the schoolhouse door open with more force than was strictly necessary.

She glanced at him. If she wasn’t mistaken, he was gritting his teeth.

He led her into the schoolhouse and began pointing out the improvements. She was impressed with the new bookshelves covered with books and the neat little desks that had replaced the long tables and benches. She turned to ask Caleb about the blackboards, but she lost all train of thought as she found him staring at her.

“What?” she asked softly.

She couldn’t breathe for a moment. “Thank you.”

“He’s perfect for you, isn’t he?” His voice was rough.

She didn’t even pretend to not know who he was talking about. “Pastor Macintosh and I will likely be good friends.” They did have a lot in common and their conversation over lunch had been invigorating to them both.

Caleb moved in closer and she noticed that his gaze flickered to her lips before returning to her eyes.

“I can assure you that he is not thinking of you as a friend, Ginney.”

“He is,” she said confidently. “We got along very well over lunch.”

Caleb looked pained as he shook his head. “Not just a friend, then.”

She swallowed. God had arranged this moment. She couldn’t shrink away from it. “Caleb, it doesn’t matter.”

“Unfortunately, it does to me.” He stepped even closer. “Somewhere in the back of my mind, I realized that if we weren’t together, you would be with someone else. Which would mean that he would hold your hand, hold you…kiss you. But it wasn’t until I saw you with Brian, and saw how he looked at you, that I realized that if I’m not going to be the last man you kiss in your lifetime, I want to at least be one of the men you kiss in your lifetime.”

Her eyes widened. “Are you saying that you want to kiss me?”

He smiled. “I’ve wanted to kiss you since you turned sixteen.”

She had thought this would be more difficult. She smiled. Then stopped and frowned, remembering his words from just moments before. “Why won’t you be the last man I kiss in my lifetime?”

He lifted his hand to her cheek in the gesture that always made her heart melt. “Because your husband will be the last man to kiss you.”

“I’m a man, Ginney. Just a mortal man. And as hard as I try to be true and do the right thing, I’m weak. When it comes to you, it seems, especially.” His voice was thick and his thumb stroked over the skin along her jaw. “Just one kiss. Just one to remember.”

She felt lost in his eyes. He seemed so intent, yet distressed, yet amazed at the same time.

“I’ve always wanted you to be my first,” she whispered before she even thought the words.

Caleb’s hand stilled on her face and he stared at her for a moment. Then he asked huskily, “What do you mean?”

She blinked up at him. “I want you to be my first kiss, Caleb.”

He breathed in deeply, then out all at once. “You’ve never been kissed?”

She shook her head.

“Not ever? By any of the men who courted you in Chicago?”

She shook her head again and wrapped her hand around his wrist where he still cradled her cheek. “I never let them get that close. I never wanted to kiss anyone but you.”

Several seconds ticked between them. Then he said, almost to himself, “This is so selfish. But I’ll just have to live with that.”

She thought to reassure him that this was part of God’s plan, but his lips touched hers before she could and she gave up everything but breathing and staying on her feet.

At one time she’d thought anticipating a kiss had to be sweeter than the actual thing. She had been so, so wrong.

Caleb had thought that he’d experienced craving and satisfaction in his life. But nothing had ever come close to this. Surprised by his reaction to Ginney’s kiss, he pulled her closer, marveling at how good she felt in his arms, how sweet she tasted.

He drank in every detail, wanting to remember the sound of her sigh, the feel of her skin under his fingertips, the smell of her hair. He could have gone on kissing her, gladly, gratefully, for the rest of his life.

But it was that thought that brought him back to reality.

This was one stolen moment. This wasn’t just a first kiss; it was also a kiss goodbye.

He let himself linger for a few seconds more, but finally lifted his head, setting Ginney back from him. Her eyes were slightly glazed and she pressed her lips together as she stared at him. He drew in a long, ragged breath.

This wasn’t going to help anything.

Giving a starving man a single taste of sustenance did nothing but make his hunger more ravenous.

“I’m sorry. That got…carried away.”

She touched her lips with her fingertips, then gave him a beautiful smile. “I didn’t mind.”

His eyes widened. She was so honest and open. It just might be the death of him.

She reached out and touched his arm before he could move away. “Caleb, it’s all right. I asked this time.”

“God. I asked what He wanted. And this is it. Us. Together.”

She looked so happy that he just wanted to smile and hug her. But he had to maintain some sense. If he got close enough to hug her, he would most certainly kiss her again. He pushed his hand through his hair. Why did she have to wait for his kiss? And why did she have to tell him that? It was more than God should expect any man, even one with the best intentions, to resist.

“I asked Him to show me what He wanted for us. And here we are.”