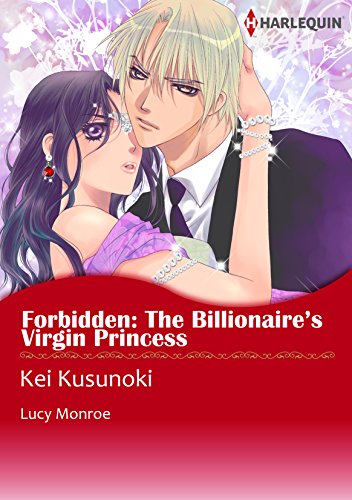 All Lina wanted was freedom from her controlling father and her duties as princess. Abandoned in America as a child, Lina never counted on anyone but herself . Then she falls for Sebastian Hawk, a fellow college student. But Sebastian is actually an undercover bodyguard hired by her father to keep a close watch on her. Sebastian takes his job very seriously, and wants nothing more than to protect Lina, though, he can’t help but find her innocence enchanting. He manages to remain professional until the day he’s recalled from duty…the day he breaks Lina’s heart. A few years later Sebastian is sent to find Lina and bring her home, but that won’t be so easy. Lina wants nothing to do with her lying bodyguard. What will become of these two? Will Sebastian still be able to resist his feelings for Lina? Will Lina be able to forgive him?

“The Billionaire’s Virgin Princess by Lucy Monroe is another heartwarming and sensual tale.
<snipped for size> The Billionaire’s Virgin Princess is another jewel in the writing career of Lucy Monroe. Lina and Hawk are exceptional. They play off each other so well, you feel like you are watching two friends fall in love. Lucy Monroe is always my first choice in romance.” ~Judy, amazon.com reader reviewer

“I’ve read every book in Lucy Monroe’s Royal Bride series and they only get better and better and more interesting. <snipped for size> Throughout the entire book I was rooting for them and you will as well because their attraction is so immediate and powerful. Hawk is torn every step of the way; he fights his attraction for Lina and in the end it’s an emotional breakup and farewell. What was incredible to read was Lina’s journey in self discovery, how she grew emotionally and outsmarted them all! This author has a gift for drawing her readers into the story and this book is no exception. In the end, let’s just say, their reunion years later is emotional and tender as only Lucy Monroe can portray and this book is a love story at it’s best! Cheers to Lucy and her Royal Brides ~Marilyn Shoemaker, amazon.com reader reviewer

“First book i ever read by Lucy Monroe and i’ve loved her books since then!” Stefeny, goodreads.com reader reviewer