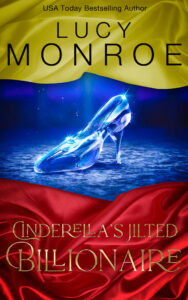 Sicilian business tycoon Carlo Messina is used to getting his way, so when his supposedly biddable fiancée leaves him standing at the altar he’s shocked…and furious.

Annette has spent her entire life trying to be worthy of her family’s love, but she’s never measured up. Her parents and two perfect sisters make up their own little family and she has no place in it, unless it’s as a modern day Cinderella. When she realizes her gorgeous billionaire fiancé expects her to change to fit his idea of family too, she does the only thing she can. She runs.

It’s five years later and Carlo and Annette are living in the same house in charge of their niece while their siblings recover from a terrible accident. The desire between these two passionate people has only grown during their time apart and inevitably, it explodes. Results? An unexpected pregnancy.

For Carlo there’s only one solution: the wedding that never took place. Can a marriage of convenience lead to the love Annette craves and her Sicilian billionaire doesn’t know he needs?

Readers outside the US, click here for your Amazon link.

Want to buy your copy signed? You can get it from Jan’s bookstore in Beaverton. Lori is fabulous to work with and she ships. Order here.

For Jadesola James, a new friend, a fabulous author and someone who appreciates a good Cinderella story, but most importantly, loves a truly emotional romance. This story if for you and other authors and readers like you! Hugs!

Annette Hudson rushed around her tiny studio apartment, grabbing last minute items. She was late leaving for the airport, but she’d had a last-minute emergency at work.
Nothing new in that. Understaffed and underfunded, her nonprofit organization expected her to wear multiple hats on a daily basis. Getting the week off for her little sister’s wedding had been nearly impossible, but for once Annette had refused to back down about taking the time.
Joyce was getting married and Annette wasn’t going to miss it. Not only was Joyce the only family who still had anything to do with her, but Annette was one of Joyce’s bridesmaids. She had the dress to prove it.
That she would see the man she’d jilted at the altar five years before, had nothing to do with the discordant concerto playing along her nerve endings. No, of course it didn’t. He was just at the center of the biggest mistake of her life, costing her the family she’d dreamed of and the family she’d grown up with, not to mention the man she’d loved beyond reason.
Although the society pages showed him escorting a bevy of beautiful women to his mother’s charity galas, Carlo Messina was still single. He would play best man for the groom. In a cruel twist of fate, Annette’s baby sister had fallen for, and was marrying Carlo’s younger brother, Fantino Messina.
The similarities between the two couples were uncanny. Joyce was the same young twenty-two Annette had been when she’d left Carlo standing at the altar. Fantino was eerily the same age Carlo had been then as well, twenty-nine.
But there was no chance Joyce would take flight as Annette had done. Not only was she a far more self-assured twenty-two, confident in the love of her Sicilian tycoon, Joyce was also seven months pregnant. The plans had already been in place for the wedding of the century when Annette’s younger sister told their families the happy news.
Their mother had been livid, but everyone else, even Carlo’s conservative Sicilian relatives, had been delighted.
Annette was thrilled for her sister, if a little envious.
Joyce was building the very life that Annette had always dreamed of, and it was no one’s fault but her own that she hadn’t realized it first. Determined to show nothing but happiness for her sister, Annette rushed for the MAX line that would take her to the airport.

The rest of the week was more of the same. Annette spent the rehearsal doing her best to avoid looking at either Carlo, or her parents. It helped she was just a bridesmaid and not maid of honor. That position had been filled by their oldest sister, Lynette.
Annette didn’t mind in the least. While she wasn’t exactly an introvert, she really didn’t like being the center of attention among this crowd, and Lynette’s role meant she was the one giving the formal toast to the happy couple at the reception.
Annette didn’t mind a bit when the youth she served focused on her. She was comfortable leading workshops for them, but that was different.
Carlo brought yet another beautiful companion to the rehearsal dinner, much to Lynette’s obvious chagrin. Apparently, her older sister expected Carlo, as best man, to be her escort and complained to both sets of parents loudly enough to be overheard.
Annette would have found it all laugh worthy if she wasn’t fighting her own jealousy over the date’s presence. After five years, she should be more inured to such feelings, regardless of her feelings for the man.
After all, she had been strong enough to walk away when she realized it wasn’t working. Which wasn’t the show of strength she wanted to believe it was, because she doubted that decision almost every day, wishing she’d tried to at least talk to him again, wishing above everything she’d handled the cancelled wedding better.
Texting her parents and asking them to alert everyone else had been a colossal mistake.
Because of course they hadn’t. They’d let everyone think she’d skipped town without a word to them. Why Carlo had shown up at the church when she’d told him to his face it was over, she didn’t understand to this day.

Carlo watched Annette walk away from him, her honey blonde hair coming down from its formal updo, her beautiful curvy body moving enticingly in her blue dress, and wondered if he’d just made the biggest mistake of his life.
He’d known since sending Cynthia home that he was going to do it.
Annette had made it easy, but even if she hadn’t, Carlo knew he would have pursued her with everything in his arsenal. Because he wanted what his brother had. A wife who wanted children with him. A wife who wanted to raise those children herself and not leave it up to others.
Someone unlike his own mother. As much as Carlo loved her, he wanted a mother for his children who would make time in her life for them.
And he wasn’t going to find that until he’d worked Annette Hudson out of his system. Five years. It had been five years since she had jilted him, made him the butt of every kind of joke.
And in those years, Carlo had had sex with exactly two other women, one time each. On both occasions he’d been left feeling hollow and unsatisfied, regardless of the physical climax they’d both achieved. He could not forget the way it felt to make love to Annette.
He still dreamt about the woman who had as good as thrown his ring back in his face.
After the debacle, she’d sent the custom-made diamond and sapphire engagement ring back via her father. Carlo still had it stored in his wall safe. Maybe he could get rid of it after he finally got her out of his system.
Because he wasn’t just being pedantic, he intended to have sex with her tonight, not make love. And in so doing, exercise the demons that would not let him go.

The rest of the reception was a blur for Annette. She couldn’t stop thinking about what was going to happen after. She’d meant to return to her spot out of the way, but Joyce had called Annette over, insisting she take Lynette’s empty matron of honor seat.
“Lynette isn’t going to be happy if she comes back and finds me here.”
“I don’t understand why she resents you so much,” Joyce said with a familiar younger sister eyeroll. “You always did everything she didn’t want to, making her life easier.”
And been made into a meme because of it.
“Mom was lucky you were so accommodating. Lynette never would have been,” Joyce said warmly.
She called Annette Cinderella with affection, finding it a great joke. She would never understand how much all the publicity that had circulated around Annette getting that moniker had hurt. Joyce had been a sunny dispositioned teen when it had happened and Annette wasn’t about to go into old hurts now.
“I saw you with Carlo.”
“I know.” Annette shook her head. “Don’t go getting romantic ideas. That man despises me.”
“It sure didn’t look like he hated you when you were dancing.”
It hadn’t felt like it either, but Annette knew something Joyce didn’t seem to want to realize. When the sex happened, it wasn’t going to be because Carlo wanted to start again with Annette.
They’d always been sexually compatible. Combustible more like.
The sex had been amazing, and Annette thought Carlo just wanted some more of it. Five years ago, she’d mistaken amazing sex for love, but she wouldn’t make that mistake again.
She was looking for closure.
Nothing more.
If her heart accused her of lying to herself, Annette ignored that too savvy inner voice.
She had a keycard to his room, and she intended to use it.