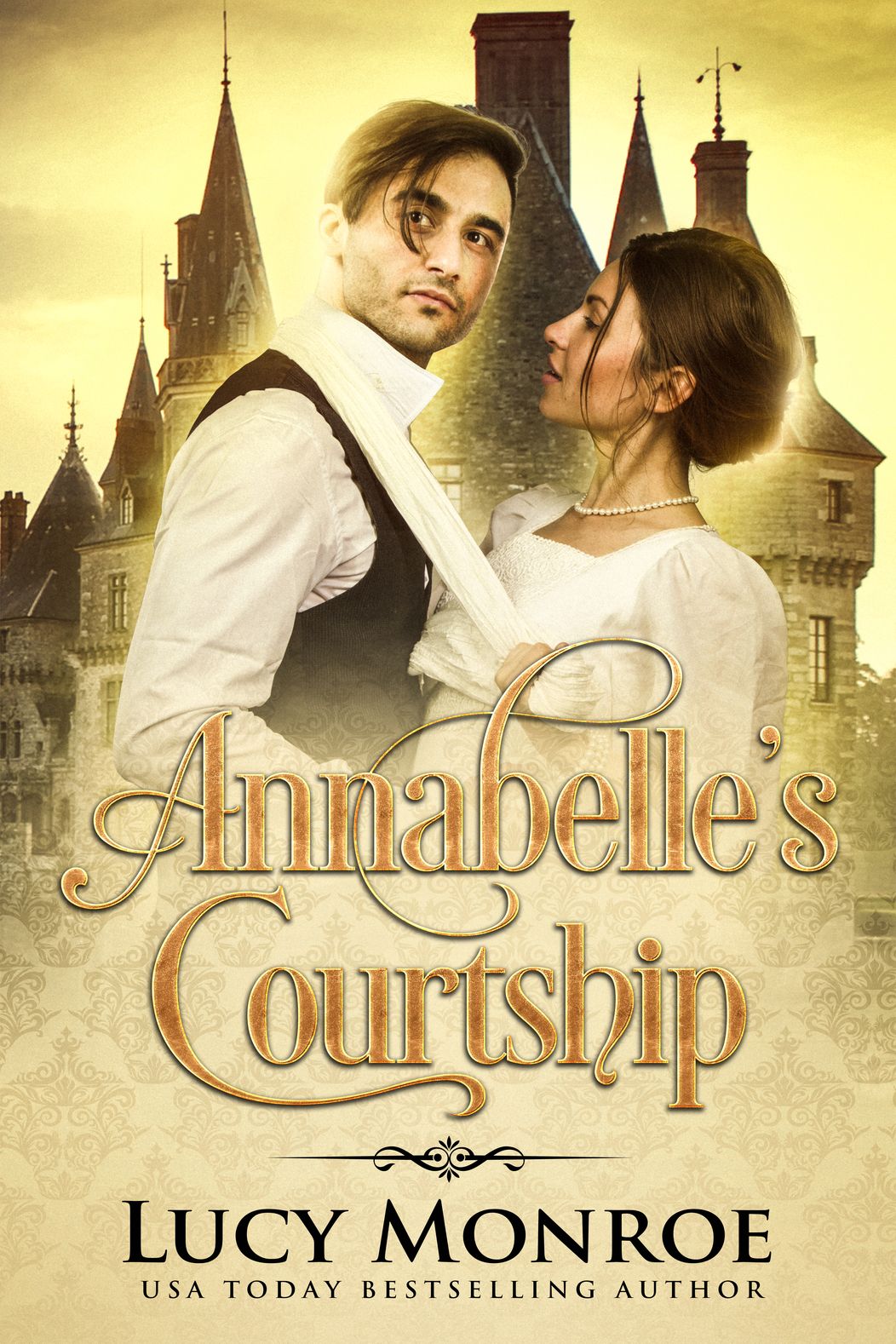 Ian MacKay, Laird of Graenfrae, has no use for love or marriage. However, his stepfather’s will mandates that marriage is what he must have…to an Englishwoman.

A sensible man, Ian develops a list of requirements in a wife: Plain, moderately dowered, older and practical. He thinks he has found the perfect candidate in Lady Annabelle.

Labeled The Ordinary her first season, Annabelle longs for a man who will see her as beautiful and love her as her father loved her mother. When she meets Ian, she thinks she has at last found that man. Until his proposal, in which he has the audacity to list his “requirements.”

She refuses his proposal. He informs her that she will marry him at the end of the season.

The battle of wills is on.

Originally published August 2007 in eBook and September 2008 in trade paperback by Samhain Publishing.

” Monroe is a masterful story teller who has the knack of  weaving in delicious details to her stories. Whether contemporary, historical, or sizzling erotica Monroe consistently hits the right note.  Historical romance fans will be delighted with this offering.” ~ Marilyn Rondau, Kwips & Kritiques

” I could barely turn the pages quickly enough to find out!   With superior characters, a clever plot, and more than enough intrigue to keep things interesting, ANNABELLE’S COURTSHIP kept me entertained from beginning to end.” – 4.5 Stars, Blue Ribbon Reviews

” I was pulled in to the book and cheered for some characters and mentally boo’d others.  I thoroughly enjoyed how she wove the fact that appearances are not everything into the story, as we find Annabelle is anything but plain and ordinary.  I am a huge fan of both this genre and Ms. Monroe’s writing and Annabelle’s Courtship only helps to further cement this feeling.” ~ Joyfully Reviewed

” Lucy Monroe’s newest novel is a delight to historical romance lovers. She pairs a classic hero with a not-so-classic heroine and sparks fly. … Beautifully written to illustrate the characters and opinions of the people of this era, Annabelle’s Courtship is true Regency at its best.” – 4 Cups, CoffeeTime Romance

” Ms. Monroe keeps the readers hooked with her unique and memorable characters and uncanny twists as the story flows.” – 5 Stars, LibraryThing

” In the end, Annabelle’s Courtship is all about trust, and the wondrous events which come to pass when it is combined with love.” – Four Angels ~ FAR

Annabelle watched the glittering crowd at Almack’s and tried to ignore the leap of her heart every time a new arrival entered. She must stop acting like a silly schoolgirl. The Scottish laird most likely would not come. For the past two weeks, he had singled her out for attention whenever they attended the same affair and on one such occasion, he had told her that he no more cared for this bastion of the ton’s doings than she did. Since her first Season when she had been labeled the Ordinary, Annabelle had detested the midweek soirees.

The unimposing building and less than stellar décor served as a backdrop to the ton’s most initiated hunt—that for the advantageous marriage. Her aunt insisted they come each week. Although the rest of the ton considered Annabelle, at the age of four and twenty, to be firmly on the shelf, Lady Beauford would not give up hope of seeing her niece wed. Annabelle could have refused to attend the season at all, but that would have curbed her own plans.

Stifling an unladylike urge to yawn, she tried to pay attention to her current companion’s meandering. A young buck enjoying his first season, Mr. Green still had the spotty complexion of youth. Experience had taught her that dancing with him required vigilance on her part to protect her tender toes. Safer to sit, sipping tepid lemonade and listening to his monologue. Unfortunately, it was not more enjoyable.

Annabelle’s mind drifted. So did her eyes, back to the entrance. Her heart skipped a beat. Laird MacKay stood in the doorway, surveying the room as if he was looking for someone. She could not tamp down hope that the person he sought was herself.

His gaze locked on her and their eyes met. His firm lips, lips that she had spent entirely too much time daydreaming about, tipped at the corners. It took all her self-discipline not to return his smile across the crowded room in a most unladylike manner. He began moving toward her. He ignored bids for attention by lovely young debutants and their fond mammas.

Unbelievable as it seemed, Ian found her company more fascinating than the loveliest creatures of the ton.

It was extraordinary, but then so was Ian. He towered above his peers and walked with an air of authority that would have done Wellington proud. Annabelle no longer even made a pretense of listening to Mr. Green. She simply waited for Ian to arrive and stop the boredom threatening to overwhelm her.

Would he ask her to dance? She experienced the most extraordinary feeling whenever he touched her, as if her corsets were laced too tight. Although she lectured herself severely on being a modern woman of the nineteenth century who did not need a gentleman in her life, he invaded her dreams and the thoughts of her waking hours.

However, Ian never called on her. He did not send her posies and notes. He did none of the things a gentleman falling in love was supposed to do. She chastised herself for being a ninny and wanting him to. She had given up finding a love like her late parents had enjoyed. Hadn’t she?

Mr. Green’s monologue stopped abruptly. “I say. Do you know this gentleman?”

Annabelle forced herself back to the present. Ian stood in front of her, a sardonic smile on his face. “Yes, indeed, Mr. Green. Lord Graenfrae and I have been introduced. Do you know him?”

“We have not had the pleasure.” Ian’s voice filled her being and Annabelle wanted nothing more than to find a secluded spot and continue their latest debate on Greek antiquities.

Mr. Green looked pained. Ian had that effect on people. He could be quite overwhelming. Annabelle smiled at Mr. Green reassuringly and introduced the two gentlemen.

Annabelle offered her hand to Ian and he bowed over it. “’Tis a pleasure to see you again, Lady Annabelle.”

Without releasing her hand, he turned to Mr. Green. “I believe the music for this set has ended.” Under Ian’s gimlet stare, Mr. Green hastily made his excuses to depart. Ian turned back to Annabelle as she vainly attempted to remove her hand from his powerful grip.

“My lord, if you will permit me.” The breathless sound of her voice shocked her.

He looked down at their joined hands and let hers go. “Sorry, lass.”

Annabelle opened her fan and brushed it gently before her face. “You seem a bit preoccupied.”

He nodded absently. “Finchley was right. You are perfect. ’Tis an advantage so early in my hunt, don’t you see?”

No, she didn’t see. Her cheeks heated. She fanned herself more vigorously. His hunt for a wife? Feeling lightheaded, she watched the whirl of dancers forming the next set. Ladies in high-waisted silk gowns danced with gentlemen in breeches and black coats. The lights reflected garishly off the jewels adorning the beau monde.

Annabelle’s attention shifted back to Ian. Eyes the color of chocolate sauce bore into hers and she could not form a thought in her head. She had an inexplicable urge to touch the silky blackness of Ian’s hair. Grateful that he could not read her mind, she dropped her eyes to his waistcoat. Something about this man filled her with desires that had not plagued her before.

“May I have the pleasure?” Ian’s voice intruded on her thoughts.

She nodded her assent before she realized that the orchestra had begun a waltz. Dancing with Ian never failed to set her pulse racing. Waltzing with his hard, muscled body so close to her own devastated her senses.

She had to swallow a sigh of pleasure as he pulled her into his arms. She tilted her head to maintain eye contact.

He asked, “This isn’t your first season then?”

Disappointment coursed through her. Annabelle had grown addicted to the stimulating conversation she usually shared with Ian. Discussing banalities like this were a far cry from it. “No. It’s my fifth, but it should be my sixth.”

“Why is that, lass?” The thick Scottish burr of his voice caressed her.

“My parents died of the flu the year I planned to attend my first season.”

His eyes filled with understanding and he nodded. “I’m sorry.” He whirled her around the room, his dancing as pleasing as the rest of him. “I suppose your first season would have been when you were seventeen?”

Understanding dawned. “If you are fishing to find out my age, I will gladly tell you. I am four and twenty.” Well past her first blush of youth as her aunt would gladly have told him.

“Surely you could have asked Ceddy my age. We’ve known each other since we were in leading strings.”

“Aye. I wanted to hear your answer, though.” He winked at her and she winked back, surprised by her own audacity.

“Did you think I might lie about my age?”

She almost asked him to explain, but there was something else she wanted to know more. “It’s your turn to answer a question from me.”

Her knees went weak at his smile and she felt gratitude that his arms held her so firmly as he led her in the seductive steps of the waltz.

“What did you mean when you said I was perfect earlier?”

The brown velvet depths of his eyes took on a deeper intensity. “’Tis quite simple. I am in need of a wife and you are perfect.”