There is no way that I spend 3+ years on a medication that has side effects for me that emulate the results of a stroke, making it impossible to write, and don’t ask the hard questions.

Will I ever write again?  Do I still have stories to tell?  Am I still relevant?

Coming off the medication meant my brain coming back online.  Slowly.  My neurologist warned me that it could take up to a year (or longer), for the medication to completely leave my body and the side effects to be mitigated.  He was not exaggerating.  I had moments of clarity followed by weeks of fog.  And throughout it all, I kept asking the hard questions.  Was writing what I was meant to be doing now?

I wasn’t the only one asking those questions.  Family and friends asked them too.  After all, they could see I wasn’t writing.  That my inability to write was causing anxiety that fed my agoraphobia like sugar fed my carb cravings (with just as much detrimental effect).

I’ll never know if I would have burnt out creatively if I hadn’t gone on that medication.  I’ll never know if my anxiety, suicidal depression and agoraphobia would have gotten as bad as it did.  Because it could have.  I have PTSD and that’s a tricky bitch with a lot of unforeseen consequences to the average person.

When my publisher cancelled my contract for the Northern Fire series because I was so abysmally late with the second and third books, I’ll admit, a big part of me was relieved.  The other part was devastated.  It was hard both financially and emotionally.  I felt like a failure, like I’d lost my identity.  Even more so because paying back the advance was so financially disastrous as my husband had been out of work for several months and we were relying on me, only we couldn’t, and that hurt. 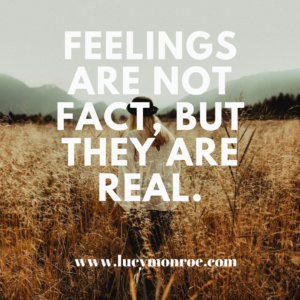 I felt like I had let everyone down.  My publisher.  My family.  Myself.

Feelings are not fact, but they are very real.

It was both the relieved and the devastated parts of me that asked the hardest question: was I still a writer?

I titled this post Writing is not for Everybody, because that is truth.

Very few people who write, whatever the form their writing takes, will ever make enough money to support themselves entirely on their writing.  If you are one that has found financial success, congratulations.  I was for several years, one of them.  I’m not really sure where my career will end up now, though.

Because while I was dealing with catastrophic health issues, the publisher world moved on and into (for me) unchartered waters.  Waters I’m still not sure how to navigate.

So, I had to ask another hard question: if my writing doesn’t earn enough to support my lifestyle, do I change my lifestyle, or my career?

When I came back to myself, it took some fits and starts, but there came a point when I realized how much I loved writing again.  When I realized I still had stories to tell.

Not all of them are romance.  I have plans to write a nonfiction book on marriage and a children’s book for transgendered youth, inspired by my oldest grandchild’s journey.  I’ve also plotted a mystery and even written the first chapter of it.

But the question still comes back to: is writing still a viable career for me?

Before I answer that, I need to share one of the things that helped me to fall in love with my writing again.  It was realizing that I liked the books I’d written before and I wanted to read more of them.  AND that I still had readers wanting the same thing.

My husband and I have always supported each other living a life of passion.  His current job pays significantly less than ones he’s had in the past, but I supported him taking it.  Why?  Because he’s a big old geek who loves making a difference and this job is tailor made for his passions.  He gets to geek out and he gets to make sure his company is meeting environmental and safety standards worldwide.  That’s a good thing.

So, when I asked myself if I could keep writing even if I wasn’t earning what I used to?  The answer came back in the form of a note he left on my desk one morning after I’d shared my fears about earnings with him the night before: 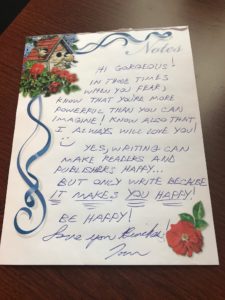 In those times when you fear, know that you’re more powerful than you can imagine!  Know also that I always will love you! 🙂

Yes, writing can make readers and publishers happy…but only write because it makes you happy! Be happy!

Something you will notice missing in this note is any mention of money, despite it being the topic of our conversation the night before.  You see my husband realized that it boiled down to, not whether I could make a livable wage writing, but whether or not writing made me happy.

Yes, we all have bills to pay.  Yes, I may have to use my MBA for something other than managing the business side of my writing if I want to keep my current lifestyle.  But that’s not the issue, the issue is: what am I willing to do to be happy?

There are no magic formulas for making it in a career in the arts.  You can be the hot new thing one day and forgotten the next.  If you ever watched Project Runway with Heidi Klum you know her famous line: One day you’re in, the next day, you’re out.  It’s a pretty glib line coming from someone who has spent the better part of two decades being in, but maybe it takes that kind of success and experience to see things clearly and with truth.

If you are writing, banking on material success, but haven’t found a way to achieve it, ask yourself if you’re happy writing.  Full stop.

Remember those favorite authors of mine who have stopped writing?  How many of them just realized writing as a career wasn’t for them?  Or maybe writing in the current climate of few bricks and mortar bookstores, publishers who expect higher ROIs than they used while striving just to break even and the absolute glut of self-published titles coming out every single month wasn’t for them.

Writing as a career may not be for everybody, but it is the best thing for me.

It makes me happy.

Find what makes you happy, and do it.

If it’s writing, don’t let publisher or reader expectations, or any outside expectations steal your joy.  Maybe you (and I) won’t make as much money as we could doing something else, but if I have learned anything in 52 years, it is that happiness is not defined by your paycheck, or accolades, or by any outside source.

It is defined by what you feel inside and if writing makes you happy, then do it!