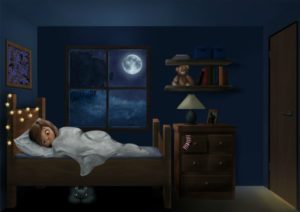 What is the bogeyman in your closet?  The monster hiding under your bed?  That thing that scares you the most?  The stuff true nightmares are made of?

I can tell you, I’ve redefined mine: the loss of self, the loss of  my brain’s facility and acuity.

Over the years, I’ve had a lot of fears – anxieties that are not always rational, but impossible to simply dismiss.  Two years in therapy learning to live and function with civilian PTSD taught me a lot about dealing with anxiety, well-founded and well…not.  But do you know what it could not do?  Therapy could not fix something rooted fully in the physical.

While I spent weeks, then months than years doing both talk and cognitive therapy, I continued to lose more and more of myself.  And I simply could not figure out why.  I had breakthroughs.  I had a new tool box with which to help me deal with my life, but I still lost my ability to write, my ability to remember, my generally positive outlook on life and delight in the living of it.

How?  Why?  What had made the monster under my bed take up residence and refuse to leave?  After an episode of moderately high blood sugar (which I did not realize at the time) and acute asthma, my symptoms presented very much like a serious stroke.  My short-term memory began failing about three years ago, but I’d been dealing with memory issues for a few years before that (not nearly so bad, but definitely a result of the PTSD that had reared its head), so I concurred with my therapist, it was psychologically related.  Then my long term memory began to fail.  I had issues with motor function, having forgotten how to swallow to the point of choking at restaurants, my hands slow to perform tasks I used to do quickly and easily.

I could not write because I could not focus, nor could I remember what my stories were about, who the characters were supposed to be, or even what I had written the day before.  Again, we thought…trauma.  I had discovered (and I thought worked through) a new difficulty writing some of the most important scenes (for me and my readers)…the love scenes in my books.

So, after that terrifying episode I mentioned earlier brought about by asthma and blood sugars, I went to my doctor who was stymied, but quickly referred me to a neurologist.  He ordered an MRI and for me to visit a specialty neurologist who dealt specifically with memory function.  The result?  Both concurred (along with the MRI) that I had not had a series of “silent strokes” as originally suggested, but the medication my PCP had put me on to prevent migraines was causing severe cognitive impairment as well as loss of motor function and the ability to feel joy.  Seriously!  All that from one medication.

Can I tell you I’d much rather deal with migraines (which impact me for a day, or three, at a time) than loss of the use of my brain 24-7?  There was no reprieve on that medication and the longer I was on it, the worse it got.  Only I hadn’t connected the dots.  Didn’t know they could be connected.  My usual intelligence had been hijacked and the ability to identify the problem right along with it.

When I thought I’d had a series of strokes, I was terrified.  My mom and grandmother had both suffered strokes.  Was I destined to follow in their footsteps?  I very nearly quit writing all together, believing my new normal would never allow me to finish a book, much less function in daily life.

But the medication, while a serious part of the problem, was not all of it.  My diabetes had decided to up its game in my body and a diet that used to work for me no longer did.  I had to go way lower on my carbs, cut out refined sugars entirely and forget forever that I loved donuts. lol

I’ve lost 34 lbs. since discovering the need to change my diet and exercise habits (3.5 months ago) and the brain fogs I’d been suffering from on top of the memory issues are now a thing of the past.  I’ve also gone off the Topamax.   It took several weeks to wean me off, and according to what I’ve read, the side effects could continue for up to 3 months after the last dose.  BUT my short term and long term memory is so much improved, it’s amazing!  I can feel joy again, delight in the simple things (like a group of small children walking to the park) and I can think!!!  I finished my first book in three years and am working diligently on my second, with hopes of completing it and another unfinished manuscript by the end of the year.  I’m nicer and more in love with my über patient husband than ever!

But the cost?  Was horrific.  One of my publishers cancelled my contract.  I’m very lucky that Harlequin Presents stuck by me, believing in me even when I doubted I’d ever come back to me.  I’ve lost touch with friends, with my readers and lost my trust in doctors.  I’ve been lonely, scared and pulled through the ringer.

Yes, I’m better now.  So, so, so much better, but no one can give me back the last three years.  No one can make a publisher, or old friends, new acquaintances, or even my readers understand something I’m not sure I’ll ever understand myself.  Some will not forgive me for dropping out of sight, for my inability to write.  I can’t and won’t blame them.  I can only say, that I’m trying to do better now. 🙂

Before all this started, I had issues to work through.  I’d burned out.  I’ve been very transparent about that, but I was getting better (my creative well filling up again), until I wasn’t.  And then things just got worse and worse and worse.

Looking forward to the journey ahead and the victories I’ve yet to realize as I hope with all my heart you all are doing the same!  Never, ever give up…even when things seem as hopeless as they can get.  We are in this journey together, and it is with great joy I say that!

6 thoughts on “Victory Can be the Product of Failure”