This is the 2nd blog post in a series on Recovering from Burnout, something I have personal experience with.

Who doesn’t dream of becoming a big time bestselling author when they start out in their writing career?  Listening to the chitchat going on at conferences and the like, we must acknowledge, not very many.

I can’t tell you how many conversations I’ve overheard or been part of about how to hit bestseller lists.  Only, there are literally thousands of romance books alone published in any given month (self-published titles account for all but a few hundred) and between 50-100 spots on the national bestseller’s lists (Like Nielson Bookscan, New York Times, USA Today & Publisher’s Weekly).  Those are not great odds.

And considering how many authors are making a decent, livable wage from their writing that don’t hit those lists, you have to wonder why we chase them so hard.

Those same conversations I mentioned earlier often include somebody’s view on how to “manipulate the system” whether to hit a best seller list on Amazon, or to “hack” the NYT bestseller list.

There was a time when I used bestseller’s lists as a measurable metric for my success and the success of my books.  However, I’ll tell you honestly, I know of a lot of books that have hit the big lists for single weeks that overall never sold as many copies of books that never hit them.

Why does this matter?

If you’re not dealing with burnout, or a loss of joy in your writing, it probably doesn’t.  But if you’re like so many authors I’ve been talking to this past year, you’re struggling with “playing the game” and subsequently the motivation, much less the creative inspiration to write.

Do you know how many of my auto-buy authors have stopped writing in the past five years?  A lot.

And by a lot, I really do mean many.  I could list five just off the top of my head, but if I start going through  my library of rereads, that number just climbs and climbs.

Why aren’t they writing anymore?  Why are some of my dearest friends who are also authors, not writing, don’t want to write, or are sick of the industry? 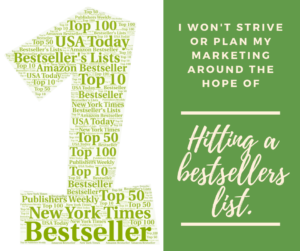 Our fixation with bestsellers lists that feed our ego but not our souls (or our pocketbooks necessarily) is part of it.

I have tremendous respect for authors who are placing on those lists, but I’m not worrying about whether or not I’ll be one of them any longer.  I am in no way saying I wouldn’t celebrate hitting a list (as I have in the past), but I am saying I won’t use hitting lists as a metric of my value or the value of my books.

Because doing so became soul sucking for me.  Full stop.

It may not be for someone else, but for me?  It is.  I can’t worry about where I hit on a list that only tells part of the story.  Because a week’s worth of book sales is never the whole story for me.  I’ve finally realized I would be really sad if it was.

Do I want to sell a lot of books?  Oh, yes.  Because I want to reach readers and touch their hearts.  But do those books all have to sell at once?  Nope.  And a lot of books for me, may be small potatoes number wise for a friend or an author I love to read. 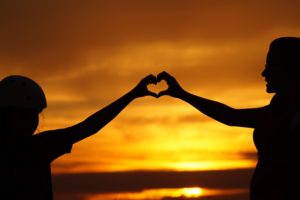 The bigger picture for me is always going to come down to the readers.  Did I touch their hearts?  Did my story give them pleasure, hope, relief, escape, something else?

My heroes are still my heroes and many of them hit at the top of the biggest lists with every new release, but I am okay with my sales not being nearly so impressive.  Why?

Because if needing to hit those lists, sell those numbers is going to stymie my creativity, then I’m better off letting that kind of metric go.

There is a very real issue for any artist, and writers are no exception, of being able to make enough money pursuing one’s craft. Only you can determine how much money you need to make writing a viable career for you.  But there is a huge spectrum of earnings between penury and the money a legitimate NYT bestselling author will earn on a book.

And only you know where you need to hit on that spectrum.  I know what I need to make writing a legitimate career for me.  Steady sales that earn me enough beyond breaking even on the costs of indie publishing (like good editing, decent covers, advertising etc.) and the promotion I do for my traditionally published work to support my lifestyle.  However, those sales will not necessarily result in me hitting any lists, big or small.

I hope as you read this, you don’t think I’m saying that setting bestseller’s lists goals is bad.  It is not.  It just isn’t for everybody.

If you’re one of the authors that needs to let that metric go in order to regain a sense of peace and joy in what you do, then let it go!

Recovering, or avoiding burnout, isn’t easy.  We got here for a reason, but if we want to refill the well, we have to stop draining it.