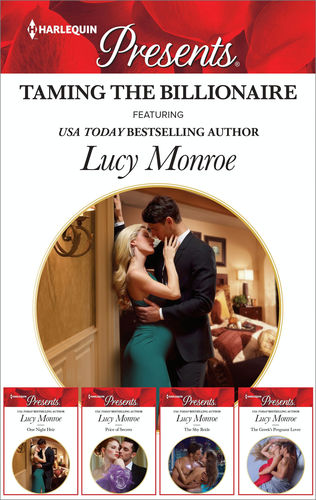 Prepare to be swept away by your very own billionaire in this sensational box set that includes two reader-favorite duets by USA TODAY bestselling Harlequin Presents® author Lucy Monroe.

Crown Prince Maksim’s country needs an heir, so when he discovers his lover Gillian Harris can’t have children he severs ties… Until one last night in her bed leaves her pregnant!

Prince Demyan does whatever it takes to protect his country, even if that means seducing Chanel Tanner into marriage. But when he discovers she is a virgin, he uncovers something in himself—a conscience…

Greek tycoon Neo Stamos wants starlet Cass with a burning desire, though he knows that she, a shy, sweet woman, will need a gentle awakening… Good thing Neo’s the master of seduction!

Dark-hearted billionaire Zephyr Nikos has come a long way from the streets of Athens. He can’t offer Piper Madison his love, but there’s a complication when Piper’s pregnancy test comes back positive!