Promised to the Prince (AUS/NZ) 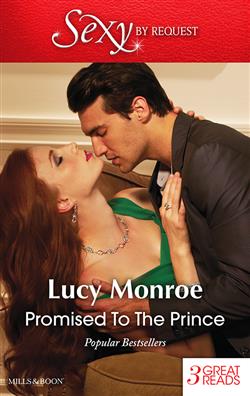 Principe Claudio Scorsolini’s future wife must make a suitable figurehead for his people and provide him with an heir. Claudio’s convenient union with Therese is hailed a success: his subjects have fallen in love with her and she’s performed her duties in the bedroom — to Claudio’s immense satisfaction. However, Therese has secretly fallen in love with her husband. How can their marriage survive when she knows she can never give Claudio a child?

Sheikh Amir bin Faruq al Zorha lives in New York, but the desert is where his heart lies. Now it’s time for him to marry… Grace Brown, Amir’s plain but indispensable assistant, isn’t exactly queen material. No matter how tempted Amir is to take her innocence, she’s off-limits. Until he returns to his homeland, where the barbarian prince replaces the businessman — and resolves that Grace will be his!

Angele has longed for her betrothal to Crown Prince Zahir to be consummated within wedlock. She naively hoped her promised husband would wait for her, as she would him — but compromising paparazzi photos have dashed those youthful dreams… She cannot become Zahir’s wife out of duty and endure a loveless union; she must let him go free…but on one condition. Without taking Angele’s hand in marriage, will the proud sheikh agree to give her the wedding night she has long dreamed of?