Midnight in the Harem (UK) 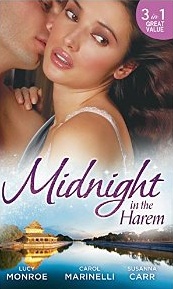 Angele’s dreams of a love match with Crown Prince Zahir have been dashed — she must release him from his promise. But on one condition: that the proud sheikh gives her the wedding night she has dreamed of!

Banished to the Harem

Playboy Sheikh Rakhal Alzirz’ reckless fling with Natasha Winters appears to have consequences. Now Rakhal whisks her to the desert. If she is pregnant, they’ll be married. If not? Then there’s room for her in his harem!

The Tarnished Jewel of Jazaar

Zoe Martin has endured six years as a slave – now she’s been sold into marriage! Being given to the Sheikh could mean freedom! But she doesn’t expect the sizzling heat a single glance from Sheikh Nadir can cause…