Midnight At The Sheikh’s Palace (AUS/NZ) 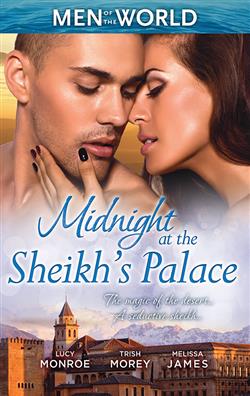 Stepping off his private jet, in his designer suit Sheikh Asad returns to his kingdom ready to secure his legacy. For beneath the starched white shirt beats the heart of a desert warrior! Iris Carpenter barely recognises the man standing before her, he’s even more magnificent than he was six years ago and even more dangerous. Iris can resist all she likes, but Asad knows it’s just a matter of time before the flame-haired temptress is back in his bed — where she belongs!

When infamous billionaire gambler, Bahir Al-Qadir is forced to protect his ex-lover, Marina Peshwah, it seems Lady Luck has finally deserted him… Marina is once again at the mercy of the man she loves to hate. She may hold the winning card but with such high stakes this proud sheikh will go all in to claim his heir!

When Amber’s betrothed was killed and the future of two desert nations hung in the balance, she had no choice; she had to marry her fiancé’s brother and heir: brooding Sheikh Harun El-Kanar… For three years, Amber has struggled to make her marriage work. But now, they’ve been kidnapped and locked together in a room…is this her last chance to woo Harun…and show him that she could be more than his paper wife, but the jewel in his crown…?